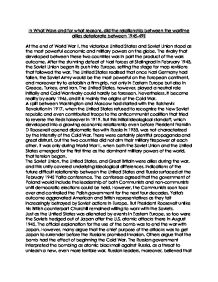 In What Ways and for what reasons, did the relationship between the wartime allies deteriorate between 1945-49?

In What Ways and for what reasons, did the relationship between the wartime allies deteriorate between 1945-49? At the end of World War II, the victorious United States and Soviet Union stood as the most powerful economic and military powers on the globe. The rivalry that developed between these two countries was in part the product of the wars outcome. After the stunning defeat of Nazi forces at Stalingrad in February 1943, the Soviet Union began its push into Europe, setting the stage for map revisions that followed the war. The United States realized that once Nazi Germany had fallen, the Soviet Army would be the most powerful on the European continent, and moreover try to establish a firm grip, not only in Eastern Europe but also in Greece, Turkey, and Iran. The United States, however, played a neutral role initially and Cold War rivalry could hardly be foreseen. Nevertheless, it became reality by early 1946, and it is mainly the origins of the Cold War. A split between Washington and Moscow had started with the Bolshevik Revolution in 1917, when the United States refused to recognize the New Soviet republic and even contributed troops to the anticommunist coalition that tried to reverse the Reds takeover in 1919. But this initial ideological standoff, which developed into a growing economic relationship even before President Franklin D Roosevelt opened diplomatic ties with Russia in 1933, was not characterized by the intensity of the Cold War. ...read more.

Yet by early 1946, with the Soviet hold on Eastern Europe tightening and its push into the Middle East, that a more distrustful attitude arose in Washington. U.S and Britain both addressed the danger of the Soviet expansion and the Cold War heated up. In the first half of 1947 the United States publicly announced two major initiatives designed to further containment: the Truman doctrine and the Marshall Plan. The Truman doctrine and its heated rhetoric made the Cold War an ideological contest rather than merely a balance of power struggle. The Marshall Plan brought much more financial assistance to Europe in order to counter sever economic problems that made Communist solution attractive to many Europeans. Together these two programs brought a far greater American role to the world than any previously (contemplated), both in resisting Communism and in helping the economies of countries that were in danger of falling under communist influence. At the same time, hearings on Communist influence in American entertainment began, calling forth a series of witnesses and sending some artists to jail. The newly created CIA widened its work from intelligence collection to covert operations, including attempts to destabilize Soviet regimes in Eastern Europe. The United States and their allies wanted Germany to become a democracy and rule themselves. The Soviets wanted to take over Germany and make it into a communist machine to starve and punish the beaten country further. ...read more.

The second reason was they were getting bad press. The Foreign press saw it as trying to starve 2 million people. This made the Soviets look like murderers and the United States and its allies look like heroes. The Berlin Airlift showed how far the United States and their allies would go in order to defeat communism. The Berlin Airlift became a symbol of United States' fight against communism. If the United States, Great Britain, and France had just pulled out of Berlin, the Soviets would have had free rein to take over West Berlin. The United States proved that they could sustain a foreign policy against communism. This foreign policy showed the United States as a world leader. By stepping up to the plate and taking responsibility for freedom and peace, by defending the West Berliners the United States and its allies made the world a safer place. The German people wanted freedom and peace and the United States, Great Britain, and France defended that right, therefore defending and preserving democracy. The Soviets of course saw this as a further insult and quickly responded throughout the 50's The Relationship of the allies was always due to eventually crumble. The ideological bases were too different, before the war Stalin expected it to be Germany allied with Europe against them. However the relationship only fell apart when Stalin's true aspirations began to be revealed and the US without a war to fight turned its eyes to its next great foe. ...read more.