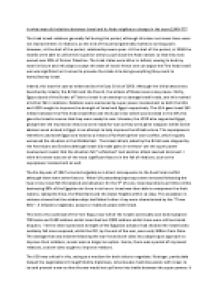 In what ways did relations between Israel and its Arab neighbours change between 1948 and 1977?

Transfer-Encoding: chunked ﻿In what ways did relations between Israel and its Arab neighbours change in the years 1948?77? The Arab Israeli relations generally fell during this period, although this does not mean there were not improvements in relations, as the end of the period generally marked a turning point. However, at the start of the period, relationships were poor. At the start of the period, in 1948 the Israelis were able to utilise their superior army to push back the Arab nations so that they now owned over 80% of former Palestine. The Arab states were bitter in defeat, vowing to destroy Israel in future and refusing to accept the state of Israel. ...read more.

Likewise, the USSR also supported Egypt, giving them the impression they too were ready for war as they were given weapons whilst Soviet advisors even arrived in Egypt in an attempt to help improve the infrastructure. The superpowers therefore used both Egypt and Israel as a means of furthering their own conflict, which equally worsened the situation in the Middle East. The Israeli attack, aided by the British was stopped by the Americans and Soviets although Israel did make gains in territory- yet the super power involvement meant that the situation felt ?unfinished? and another attack seemed imminent. I think this event was one of the most significant factors in the fall of relations, due to the superpower involvement as well. ...read more.

Yet the sheer speed and strength of the Egyptian advance had shocked the Israelis who suddenly felt more exposed, whilst the IDF, by the end of the war, were only 100km from Cairo. The damage that was evident following the war forced both sides into adopting an approach to improve their relations, as war was no longer an option. Hence, there was a period of improved relations, as both sides sought to improve relations. The USA was critical in this, acting as a medium for both sides to negotiate. Kissinger, particularly helped the negotiations through Shuttle diplomacy. America also held discussions with Israel, to try and prevent a war so that the war would not spill over into battle between the super powers. It was also in the USA?s interests to hold discussions with Egypt so that the oil supply to the USA would not be disrupted. ...read more.