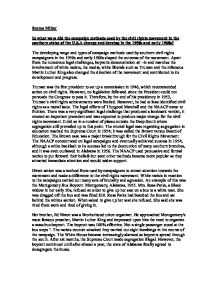 In what ways did the campaign methods used by the civil rights movement in the southern states of the U.S.A change and develop in the 1950s and early 1960s?

Emma Miller In what ways did the campaign methods used by the civil rights movement in the southern states of the U.S.A change and develop in the 1950s and early 1960s? The developing range and types of campaign methods used by southern civil rights campaigners in the 1950s and early 1960s shaped the outcome of the movement. Apart from the numerous legal challenges, boycotts demonstration sit -in and marches the involvement of white racists, the media, white liberals such as Truman and the infamous Martin Luther King also changed the direction of the movement and contributed to its development and progress. Truman was the first president to set up a commission in 1946, which recommended action on civil rights. However, no legislation followed since the President could not persuade the Congress to pass it. Therefore, by the end of his presidency in 1953, Truman's civil rights achievements were limited. However, he had at least identified civil rights as a moral issue. The legal efforts of Thurgood Marshall and the NAACP came to fruition. There was a very significant legal challenge that produced a landmark verdict, it created an important precedent and was expected to produce major change for the civil rights movement. It did so in a number of places outside the Deep South where segregation still prevailed up to this point. The crucial legal case regarding segregation in education reached the Supreme Court in 1954; it was called the Brown versus Board of Education. ...read more.

As a result, new organizations formed and new styles of protest developed. Building on the success of the Montgomery Bus Boycott, the new organisation, the SNCC the Student Non-violent Coordinating Committee decided to confront a wide range of issues concerning equality and discrimination. Peaceful protests had moved into a more organized and vigorous form of direct action. In Greensboro, North Carolina, four students from the Local Agricultural and Technical College entered a branch of Woolworths and ordered food and drink at the 'whites only' counter. The majority were college students -idealistic, determined, and spontaneous with no jobs to lose. The sit in spread very widely and very quickly; by April 78 different places were involved. The tactic was to create a crisis and establish a tension out of which action would occur. The reaction of the police was revealing. There were over 2000 arrests in all the sit-in in 1960. Police frequently arrested the protesters for breaking the law, but ignored the white people who attacked them. Television cameras showed the rest of the USA the well-dressed, peaceful, book-reading mainly black students and the loud-mouthed, uncouth whites swearing and frequently attacking them. US citizens could draw their own conclusions. The bitterness of the white southern reaction to the protests began to play into the hands of the demonstrators. These protests were clearly linked with Gandhi's philosophy, which inspired King. The protestors were non-violent merely covering their heads when beaten, and not striking back. ...read more.

At one point, Faubus withdrew state troopers and the white racists had the streets to themselves, violence broke out and the children had leave to avoid serious injury. There was a film produced it showed respectable well dressed middle aged ladies push down barriers in anger when news came that the children had finally entered the school was to see real hatred in action. By this time, considerable change had come on the civil rights front. Black people were becoming more willing to protest and not just rely on federal protection. The case of James Meredith was another example of passive resistance. James Meredith was a black student and was physically barred by the governor of Mississippi despite this he attempted to register but angry mobs assembled and violence erupted and 170 federal marshals desperately tied to keep order. Meredith survived but two onlookers, including a French journalist were killed. Meredith's brave achievement was an inspiration to others. A similar resistance was carried out in Alabama the governor personally barred two black students from entering the University of Alabama in June 1963. However, this was largely a complaint against what Wallace considered an infringement of state liberties. After making his protest, he accepted federal authority and the students were subsequently allowed in. There were many changes and developments in the methods employed by civil rights protestors in order to bring success to the campaign. From arguing cases formally in court and using persuasive tactics, to direct action but in a non-violent way such as passive resistance. The campaigns gained wider support exploiting the media and asking for support from the federal government including the involvement of white liberals. ...read more.