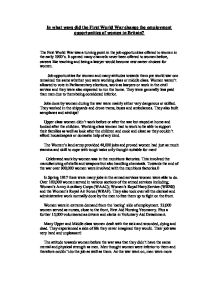 In what ways did the First World War change the employment opportunities of women in Britain? The First World War was a turning point in the job opportunities offered to women in the early 1900's. It opened many channels never been offered to women before, careers like teaching and being a lawyer would become new career choices for women. Job opportunities for women and many attitudes towards them pre world war one remained the same whether you were working class or middle class. Women weren't allowed to vote in Parliamentary elections, work as lawyers or work in the civil service and they were also expected to run the home. They were generally less paid than men due to them being considered inferior. ...read more.

Over 100,000 women served in various sections of the armed services including; Women's Army Auxiliary Corps (WAAC); Women's Royal Navy Service (WRNS) and the Women's Royal Air Force (WRAF). They also took over all the clerical and administrative work normally done by the men to free them up to fight on the front. Women were in extreme demand from the 'caring' side of employment. 23,000 women served as nurses, close to the front, First Aid Nursing Yeomanry. Plus a further 15,000 volunteered as drivers and clerks in Voluntary Aid Detachment. Many Upper and Middle class women dealt with the sick and wounded, dying and dead. They experienced a side of life they never imagined they would. Their job was very hard and unpleasant! ...read more.

Laws also changed allowing women to seek for divorce on grounds of adultery; to hold down a job while married in the professions or civil service. They could hold onto or dispose of property on the same terms as their husbands; vote when there 21 and are entitled to pensions just the same as dependant children. In conclusion the war did make a difference to women's jobs as it opened many more paths. People could see how good they were at what they were doing during the war and therefore how useful they would be after! Without the war they would never of have chance to prove themselves. There was still a way to go before equality but it had set women on the path towards treatment on an equal level to men in the workplace. ...read more.