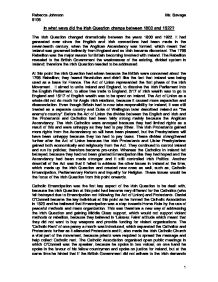 In what ways did the Irish Question change between 1800 and 1922? The Irish Question changed dramatically between the years 1800 and 1922. It had generated ever since the English and Irish connections had been made in the seventeenth century, when the Anglican Ascendancy was formed, which meant that Ireland was governed indirectly from England and so Irish became discontent. The 1798 Rebellion was the major reason for Britain becoming involved with Ireland. The Rebellion revealed to the British Government the weaknesses of the existing, divided system in Ireland; therefore the Irish Question needed to be addressed. At this point the Irish Question had arisen because the British were concerned about the 1798 Rebellion; they feared Revolution and didn't like the fact that Ireland was being used as a base for France. The Act of Union represented the first phase of the Irish Movement. It aimed to unite Ireland and England, to dissolve the Irish Parliament into the English Parliament, to allow free trade to England, 2/17 of Irish wealth was to go to England and 15/17 of English wealth was to be spent on Ireland. The Act of Union as a whole did not do much for Anglo Irish relations, because it caused more separation and disassociation. Even though Britain had to now take responsibility for Ireland, it was still treated as a separate country and Duke of Wellington later described Ireland as "the enemy's country". Before the Act of Union the divides between the English and Irish and the Protestants and Catholics had been fairly strong mainly because the Anglican Ascendancy. The Irish Catholics were annoyed because they had limited rights as a result of this and were unhappy as they had to pay tithes. The Irish Protestants gained more rights from the Ascendancy so will have been pleased, but the Presbyterians will have been unhappy because they too had to pay taxes. ...read more.

Gladstone was not unaware of the political advantages of Irish Reform and so in 1868 the Irish Question was placed at the forefront of politics and the Government agenda. The first of Gladstone's Irish Reforms was the Irish Church Act in 1869. This disestablished and disowned the Anglican Church in Ireland and destroyed its privileged status and taking over its property; therefore the ascendancy was solved. The second Irish Reform was the First Irish Land Act in 1870, which limited landlord's rights over their tenants and prevented evictions. This however did little to solve the problems of the Irish Rural economy and it was ten years too late, because the Irish Question had started to move away from this issue. It did inspire Irish Nationalism and paved the way for Parnell and Home Rule, because The Irish Universities Bill 1973 was the last of the Reforms, but this failed and led to the Liberals downfall in the 1874 election. This indicated that the Irish Reforms were having an impact of the make up of the British Government. The key point about Gladstone's impact on the Irish Question is that even though his reforms were unsuccessful as he could not keep up with the continuous changing of the Irish Question, he did avert violent rebellion and at least the British Government were seen as doing something. The Irish question after this point was about the Land question and Home Rule, because Parnell like O'Connell and Gladstone highlighted the role of the individual in shaping the Irish Question. The Irish Land League was created and Gladstone decided that Home rule was the only solution as the Reforms had failed and support for the Home Rule party had increased. The Land Question was important with the Irish Farmers as they found themselves facing agricultural depression due to the poor harvests and the cheap grain that had been imported causing food prices to decrease. ...read more.

The British Government would also be allowed naval facilities in Ireland. The Irish Parliament rejected this, especially the Oath of Allegiance, but they did say they would have some connection to the UK. Therefore areas of the Status needed discussing, so the Oath of Allegiance was watered down, Northern Ireland was allowed to opt out of the Treaty, but a Boundary Commission would be set up so that it would rejoin the rest of Ireland eventually due to immense criticism and the British would have three naval bases in Ireland. Finally on the 5th December at 2.30am the Treaty was signed, because Lloyd George had used the threat if you don't sign the Treaty we will go to War, which meant that they had no other choice because a war will have been unpopular with the British Government. The Treaty was very popular in Britain; therefore passed through parliament easily, whereas with Ireland it brought great discord and argument. It had been was a temporary measure to appease the split between North and South and to solve the Irish Question one and for all. In conclusion it can be seen that the Irish Question had a changing nature over time, because of the impact of certain individuals, such as Gladstone and Parnell and outside events in shaping the Irish Question. The attempts to answer the question were unsuccessful because they came too late which meant that issues were been addressed that were no longer important. An example of this is Land Act, which was passed too late. There were common links and themes that occurred, such as, when Britain gave harsh responses to events, which they did not plan and there were poor consequences of this. Many of the proposed solutions created more problems and it is clear that the Irish Question still had not been answered as the troubles still continued after 1922 and even to this day they still exist. ?? ?? ?? ?? Rebecca Johnson Ms. Savage 8108 1 ...read more.