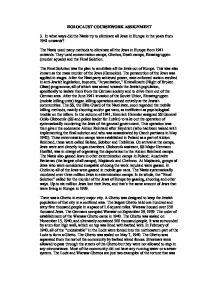 In what ways did the Nazis try to eliminate all Jews in Europe in the years from 1941 onwards?

HOLOCAUST COURSEWORK ASSIGNMENT 3. In what ways did the Nazis try to eliminate all Jews in Europe in the years from 1941 onwards? The Nazis used many methods to eliminate all the Jews in Europe from 1941 onwards. They used concentration camps, Ghettos, Death camps, Einsatzgruppen (murder squads) and the Final Solution. The Final Solution was the plan to annihilate all the Jews out of Europe. This was also known as the mass murder of the Jews (Genocide). The persecution of the Jews was applied in stages. After the Nazi party achieved power, state enforced racism resulted in anti-Jewish legislation, boycotts, "Aryanization," Kristallnacht (Night of Broken Glass) programme, all of which was aimed towards the Jewish population, specifically to isolate them from the German society and to drive them out of the German area. After the June 1941 invasion of the Soviet Union, Einsatzgruppen (mobile killing units) began killing operations aimed entirely at the Jewish communities. ...read more.

The largest Ghetto held one hundred and sixty five thousand people in a space of 1.6 square miles. Warsaw housed over 350 thousand Jews. The Germans occupied Warsaw on September 29, 1939. The order of establishment of the Warsaw Ghetto came in 1940. The Ghetto was sealed on November 15, 1940, and ultimately contained 500 thousand people. It was surrounded by a ten-foot high wall, which on top was lined with barbed wire. In February of 1940, all of the "undesirable" in the Lodz were forced into the northeastern part of the Lodz to form a Ghetto. The Ghetto was sealed on May 7, 1940. The Ghetto was separated from the rest of the community by barbed wired fences. Streetcars were allowed to pass through the streets of the Ghetto but they were not allowed to stop in any circumstance. Most of the community did not have any running water or a sewer system. The Lodz and Warsaw Ghettos are just two examples of the torture that was put up with throughout the Holocaust. ...read more.

These were people like Jews, (men, women, and children) Roma's (Gypsies) and also officials of the Soviet State and Communist Party. The Einsatzgruppen also murdered thousands of people who lived in the homes designed specially for the mentally and physically disabled people. During the invasion of the Soviet Union in June 1941, the Einsatzgruppen followed the German army as it advanced deep into Soviet Territory. The Einsatzgruppen, often drawing on local support, carried out mass-murder operations. In contrast to the process of deporting Jews from Ghettos to camps, Einsatzgruppen came directly to the home communities of the Jews and slaughtered them. The German army provided vital support to the Einsatzgruppen, including supplies, transportation and housing. At first the Einsatzgruppen shot mainly Jewish men. Soon, wherever the Einsatzgruppen went, they shot all Jewish men, women and children without thought for their age or sex. They were all buried in a massive grave nearby. Late in July 1941, a troop of order police, under the command of higher SS and police leaders recently chosen for the occupied Soviet Union, engaged in systematic annihilation operations against larger Jewish communities. By Marcus Wright ...read more.