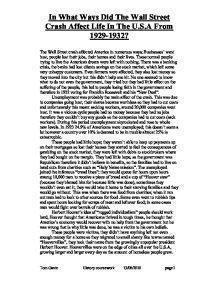 The Wall Street crash affected America in numerous ways; Businesses' went bust, people lost their jobs, their homes and their lives. These normal people trying to live the American dream were left with nothing. There was a banking crisis, the banks had lost clients savings on the stock market, which left some very unhappy customers. Even farmers were affected, they also lost money so they moved into the city but this didn't help one bit. No one seemed to know what to do not even the government, they tried but they had little effect on the suffering of the people, this led to people losing faith in the government and therefore in 1932 voting for Franklin Roosevelt and his "New Deal". Unemployment was probably the main affect of the crash. This was due to companies going bust, their shares became worthless so they had to cut costs and unfortunately this meant sacking workers, around 20,000 companies went bust. ...read more.

no help from the government but he was wrong that is why little was done, he was a victim to his own beliefs. These people were victims, they didn't have anything left not even enough money for a home so they migrated to small shanty like towns named "Hoovervilles", they took their name from the growingly unpopular president Herbert Hoover. Hoovervilles were on the edge of cities all over the U.S.A, growing larger and larger every day as the amount of homeless people grew. Whilst others took the route of becoming a Hobo, they would roam the cities sneaking on to trains looking for food. However it wasn't just city people who suffered farmers also were affected, farmers didn't want to lose their homes and land so they worked harder and harder every day producing more and more goods, however this led to overproduction, they had all these crops with no one to sell them to, because there was so many goods in the agriculture industry the prices were forced down. ...read more.

One of the most famous groups were the "Bonus Army", they were a group of struggling World War 1 veterans who were seeking their promised government pension early because they were hit hard by the depression. They then marched on Washington and set up a "Hooverville". However the government wasn't going to sit back and let it happen, they responded with force in the form of an army armed with gas as a result leaving 2 dead and 1000 injured. This was the last straw, finally when the next election came around the American people made their voices heard, by an overwhelming majority they voted in a new Democratic government under the lead of Franklin Delano Roosevelt (FDR) who promised to do more for the country and lead America out of the tough times, he promised them a "new deal" only time would tell if he would deliver. ?? ?? ?? ?? In What Ways Did The Wall Street Crash Affect Life In The U.S.A From 1929-1932? Tom Gavin History coursework 13/08/2010 page1 ...read more.