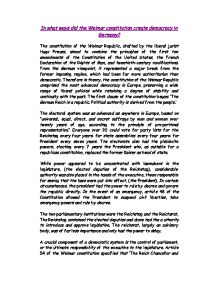 In what ways did the Weimar constitution create democracy in Germany?

The electorate also had the plebiscite powers, electing every 7 years the President who, as suitable for a republican constitution, replaced the former Kaiser as head of state. While power appeared to be concentrated with lawmakers in the legislature, (the elected deputies of the Reichstag), considerable authority was also placed in the hands of the executive, those responsible for seeing that the laws were put into effect, (the President). In certain circumstances, the president had the power to rule by decree and govern the republic directly. In the event of an emergency, article 48 of the Constitution allowed the President to suspend civil liberties, take emergency powers and rule by decree. ...read more.

The constitution of the Weimar republic also included a bill of rights, intended to protect the interests of individual citizens and the population as a whole were guaranteed certain basic rights, including equality before the law (Article 109), 'liberty of travel and residence' (Article 114), the inviolability of the home (Article 115) and the right of every German 'to express his opinion freely by word, in writing, in print, in picture form, or in any other way' (Article 118). Finally, there was even a device, in Article 48, to safeguard democracy by the use of emergency presidential powers should these be necessary. The Reichstag could, however withdraw these if it considered that the President's action was illogical. Therefore, in these ways, the Weimar Constitution promoted and defended democracy in Germany. ...read more.