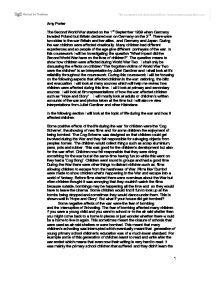 In what ways were the lives of children on the home front affected by the Second World War?

The Second World War started on the 1st September 1939 when Germany invaded Poland but Britain declared war on Germany on the 3rd. There were two sides to the war Britain and her allies, and Germany and Japan. During the war children were affected drastically. Many children had different experiences and so people of the age give different portrayals of the war. In this coursework I will be investigating the question "What impact did the Second World War have on the lives of children?". The question means to show how children were affected during World War Two. I shall only be discussing the effects on children "The forgotten victims of World War Two were the children" is an interpretation by Juliet Gardiner and I shall look at it's reliability throughout the coursework. During this coursework I will be focusing on the following aspects that affected children in the war: rationing, the blitz and evacuation. I will look at many sources which will help me review how children were affected during this time. I will look at primary and secondary sources. I will look at film representations of how the war affected children such as "Hope and Glory" . I will mostly look at adults or children's written accounts of the war and photos taken at the time but I will also review interpretations from Juliet Gardiner and other Historians. In the following section I will look at the topic of life during the war and how it affected children. Some positive effects of the life during the war for children were the 'Cog Scheme', the showing of new films and for some children the enjoyment of being bombed. The Cog Scheme was designed so that children could get involved during the War and they felt responsible for salvaging objects from peoples homes. The children would collect things such as scrap aluminium, pans, pots and rubber. ...read more.

Even the poorest children had to find all the items. Depending on wealth, they would pack it in a suitcase, pillowcase or brown paper parcels. This is negative because the richer evacuees could make fun of poorer evacuees. Even with children having to bring all these items some mothers changed their minds about it (at the station) and might have to reapply for evacuation. With children at home they are in more danger. If children were evacuated then sometimes culture clashes happened between children when they arrived in there new home or returned to their original home. The ones who went abroad had different games to ones who went to the country or stayed at home. If one child said "can I bash you" then another child might not know what they meant and this led to confusion of previous relationships. Also, many children would also miss being away from their parents and familiar surroundings and wouldn't have a good experience of evacuation. In Source A5 it shows that Irene was sent to Stratford-Upon- Avon and was apple season. There were loads of apples that people left outside gates for people. She was utterly surprised when she found out that apples came from trees. During the evacuation many children found out things that astonished them such as where crops come from. It looks like it was written by Irene Weller in Stratford-Upon-Avon sometime in the war. It sounds like a diary account or letter. This may have been written because Irene wanted to write about what had happened to her so she could look back on it, she wrote it for her mother or it was propaganda that has been put in a newspaper so Irene had to write this. This source was written during a time when many children found out new things and this shows that some children that went to Stratford-Upon-Avon learnt about apples. ...read more.

Putting on gas masks was essential and affected children positively however the gas masks affected children negatively because they smelt bad and were scary. After this was the Blitz and children didn't realise the seriousness of war (this is portrayed brilliantly in 'Hope and Glory') but many loved ones were lost during these times which brought them back down to earth. Evacuation allowed children to be sent away from the harshness of war, this could be abroad or to the countryside, and the children found out new things such as where apples come from. This was positively affecting the children in many ways however some children stayed in the cities and didn't find out where items truly came from like the evacuees but they experienced being away from their parents and the pain within that, the children in the cities saw dog fights, death and destruction. All evacuated children had different experiences depending on who or where they went to. In rationing many of the poorer classes of children had better diets and fairness but if you were a richer child then you wouldn't have the high standard of living they were entitled to, they had to stick to rationing booklets. During the war children helped with the war effort ( like the 'Cog Scheme'). Poorer children were now able to go to the cinema regularly like the richer children had always been able to do. If you were a primary school child then you might not have had an education and this made it harder to get a job. I think that sources C1 and D6 were most useful because you know where they came from and when they are made. However I think source A5 was least useful because it is written by a child, which could be over exaggerated, and only shows one way that she was affected. So, overall children were affected in many ways and Juliet Gardiner's interpretation is valid in showing how children were affected in a variety of ways. ?? ?? ?? ?? Amy Porter 1 ...read more.