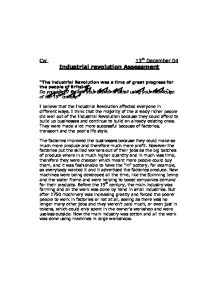 Cw 13th December 04 Industrial revolution Assessment "The industrial Revolution was a time of great progress for the people of Britain." Do you agree? Explain your answer in detail using your knowledge of the 19th century. I believe that the Industrial Revolution affected everyone in different ways. I think that the majority of the already richer people did well out of the Industrial Revolution because they could afford to build up businesses and continue to build on already existing ones. They were made a lot more successful because of factories, transport and the poor's life style. The factories improved the businesses because they could make so much more produce and therefore much more profit. However the factories put the skilled workers out of their jobs as the big batches of produce where in a much higher quantity and in much less time, therefore they were cheaper which meant more people could buy them, and it was fashionable to have the "in" pottery, for example, so everybody wanted it and it advertised the factories produce. New machines were being developed all the time, like the Spinning Jenny and the water frame and were helping to boost companies demand for their products. ...read more.

However in around 1780-1820 canals were introduced around the country, they were planned for and paid for by the Duke of Bridgewater. He owned coalmines and he sold his coal to Manchester, but the road was 11km long and very expensive. He opened a Bridgewater canal and was able to tr5ansport his coal for a much lower price, and made the price come down a lot so it was more popular. The main problem with canals was that they needed hills in order for the water to flow downwards and fast enough, but the produce was sent much faster and for about 1/6th of the price via roads. Often canals would flood and they took up a lot of space so eventually, using the idea of steam, the railway was introduced. Thomas Savery originally developed a steam driven engine to pump water out of mines and James Watt adapted it to suit the purpose of transport. By 1800 steam was the most common power used for transport and also in factories, mines and mills. Because of railways all coaches stopped running and canal prices were greatly reduced. ...read more.

People working in factories were paid very little and therefore could not afford decent food, clothes, shelter and water. People were living in tiny rooms in houses often with 7 or 8 people in each room. The people were only earning enough money to just feed themselves or less, let alone their families, this is why children had to work but still they had not enough money to get themselves out of the situation. There were barely any laws preventing these conditions and people caught illnesses and died without any investigation. One of the main diseases was Cholera. It was spread in dirty drinking water, but at the time they didn't know that. The Government did actually attempt to help, but they failed and pretty much gave up as it was costing them too much money. Ultimately I think the Industrial Revolution was a good thing for Britain but not for the individuals in it. Britain would not have had its Empire or be as powerful country as it was without it as we would still be behind in the times, personally I think it was a good thing overall but it could have been dealt with a bit better and made it less hard on the poor people. Jade Hicks 9xw ...read more.