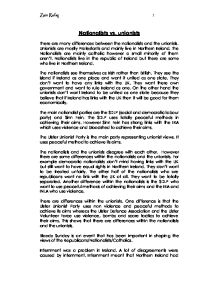 Nationalists vs. unionists There are many differences between the nationalists and the unionists. Unionists are mostly Protestants and mainly live in Northern Ireland. The Nationalists are mainly catholic however a small minority of them aren't. Nationalists live in the republic of Ireland but there are some who live in Northern Ireland. The nationalists see themselves as Irish rather than British. They see the island if Ireland as one place and want it united as one state. They don't want to have any links with the UK. They want there own government and want to rule Ireland as one. On the other hand the unionists don't want Ireland to be united as one state because they believe that if Ireland has links with the UK then it will be good for them economically. The main nationalist parties are the SDLP (social and democratic labour party) and Sinn Fein. The SDLP uses totally peaceful methods in achieving their aims. However Sinn Fein has strong links with the IRA which uses violence and bloodshed to achieve their aims. The Ulster Unionist Party is the main party representing unionist views. It uses peaceful method to achieve its aims. The nationalists and the unionists disagree with each other. However there are some differences within the nationalists and the unionists. For example democratic nationalists don't mind having links with the UK but still want to have equal rights in Northern Ireland. They don't want to be treated unfairly. ...read more.

While this was all happening James ran away to his close friend Louis XlV who was the king of France and also William of Oranges enemy. James asked Louis to supply him with ships and troops so he could invade England and get his throne back. He was supposed to invade England but instead he landed in Ireland on March 1689 hoping to get the support of Catholics to increase his support. The city of Londonderry was the key. It almost fell without a fight as James and his forces approached the city. He faced resistance in Londonderry. The protestants were able to hold James off for long enough for William's army to come and help. William of Orange finally defeated James at the Battle of Boyne in 1690. The war was over and the treaty of limerick was signed in October 1961 which made the Protestants power stronger and the Catholics weaker. William of Orange has been a hero to the Protestants at different points in history. For example, in the early 1700's, William was remembered with a lot of respect. In the late 18th century the tension between Ireland and Ulster was rising. There were violent fights between Protestants and Catholics in Armagh quite often and they weren't unusual. The story of William of Orange was revived by the Orange order. They made him look as a protestant hero but they ignored the facts that most of Williams's army were Catholic and the pope (head of Catholic Church) ...read more.

Another thing which has stopped the peace process moving forward is the attack on Stormont because of disagreements between loyalists and republicans. Michael Stone, a loyalist, stormed into Stormont during a debate. He was carrying about 6 devices in a bag which police have now defused. These devices could have caused a lot of damage. He was also carrying a gun and a knife in the bag. This attack was motivated by the fact that loyalists and republicans still don't get along. If peace is to be achieved in the future then the extreme nationalists and unionists need to learn to live together in peace and get along with each other. The fact that a 15 year old boy was attacked by a gang in county Atrim and died later on in hospital is another reason why the peace process is struggling to move forward in Northern Ireland. The 15 year old boy, Michael, and a friend were confronted by a gang of boys. A relative said that one of the boys hit Michael with a baseball bat on his head. The report on Ceefax says that they jumped on his head. The boy struggled to get home where the extent of his injuries were realised. This shows that there is a lot of hatred between Nationalists/Catholics and Unionists/Protestants. If peace is to be achieved in the future then the Nationalists and Unionists need to learn to get on with each other and live together peacefully. ?? ?? ?? ?? Zain Rafiq 1 ...read more.