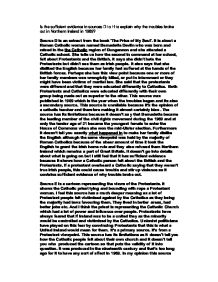 Is the sufficient evidence in sources D to H to explain why the troubles broke out in Northern Ireland in 1969?

Source D is an extract from the book 'The Price of My Soul'. It is about a Roman Catholic woman named Bernadette Devlin who was born and raised in the the Catholic region of Dungannon and she attended a Catholic school. She tells us how the second in command at her school, felt about Protestants and the British. It says she didn't hate the Protestants but didn't see them as Irish people. It also says that she disliked the English because her family had suffered at the hands of the British forces. Perhaps she has this view point because one or more of her family members was wrongfully killed, or put in Internment or they might have been victims of martial law. She said that the protestants were different and that they were educated differently to Catholics. Both Protestants and Catholics were educated differently with their own group being made out as superior to the other. This source was published in 1969 which is the year when the troubles began and its also a secondary source. This source is unreliable because it’s the opinion of a catholic teacher and therefore making it almost certainly bias. The source has its limitations because it doesn’t say that Bernadette became the leading member of the civil rights movement during the 1969 and at only the tender age of 21 became the youngest female to enter the House of Commons when she won the mid-Ulster election. Furthermore it doesn’t tell you exactly what happened in to make her family dislike the English although the same viewpoint was held by the majority of Roman Catholics because of the sheer amount of time it took the English to grant the Irish home rule and they also refused them Northern Ireland which remains a part of Great Britain. It doesn’t go into details about what is going on but I still feel that it has sufficient evidence because it shows how a Catholic person felt about the British and the Protestants. If a protestant overheard a Catholic saying that they weren’t true Irish people, this could cause trouble and stir up violence so it contains sufficient evidence of why trouble broke out.

Source E is a cartoon representing the views of the Protestants. It shows the Catholic priest tying and bounding with rope a Protestant woman. I feel this source has a much deeper meaning as a lot of Protestant people felt victimised against by the Catholics as they being the majority had laws favouring them. They lived in better areas, had better jobs etc. And I think the priest is representing the Catholic Church which had a lot of power and influence over people. Protestants have always feared that if Ireland was to be a united they as the minority would be controlled and victimized by the Catholics. Unionist politicians have played on this fear by convincing Protestants that this is what a United Ireland would mean for them. It’s a primary source. It’s from a Protestant viewpoint. This source has its limitations as it doesn't tell you how the Catholic people felt about their own church and it doesn't tell you who  produced the cartoon so that puts the validity of it into question. It was produced in the nineteenth century and that’s too long ago for it to have any sort of affect in 1969. In my opinion this source does not contain sufficient evidence as not only is it bias it’s exaggerated because it’s a cartoon. This source doesn't show much information but it does show that there has been resentment over a long period of time between Catholics and Protestants, which eventually led to the troubles in 1969.

Source F • It is a map of Derry in 1966 showing population and which councillors were elected in each area • You can see that there is a lot more Catholics than protestants living in Derry (mention the figures) • This map is a solid piece of evidence that there was blatant vote rigging or Gerrymandering in the City of Derry – It is reliable because it is an official government document produced by the Boundary Commission. • Voting in Local elections in Northern Ireland was on the basis of property. If you did not own a house you could not vote or if you owned several houses or shops etc you could vote for each on of these. This generally discriminated against the poorer Catholic population • By the 1960s many young Nationalists were disillusioned with Northern Irish politics. They blamed the Unionist party and some also blamed the Nationalists for not playing a more constructive role politics

Source F is a map of Derry in 1966, it shows that there were 20,102 Catholics to 10,274 Protestants and this shows that the Catholics were the majority. It shows that approximately 9000 Protestants voted compared to 15,000 Catholics. Source F a map showing the Gerrymandering in three areas (North Ward, South Ward and Waterside Ward) in the city of Derry during 1966. This source is extremely useful as it is just three years before the troubles broke out so it is a direct short-term cause.

This source basically shows that that the Boundary commissioner drew up the boundaries to maximise the Protestant vote. This map is a concrete evidence of Gerrymandering in the City of Derry. It is reliable because it’s an official government document produced by the Boundary Commission. This was done to maximise the Protestant vote. This angered the Catholics population and they felt second class citizens.

This was one of the reasons why they demanded better civil rights by going on marches. What this source doesn't show is the areas where Catholics were being unfairly treated as in jobs and housing. Also it doesn't show other areas of Ireland because it only shows three areas. The limitations of this source are that it is quite complicated to look at and read and I have mentioned it only shows certain areas. I would say overall this is a very useful source as it showed why trouble broke out in the short term.