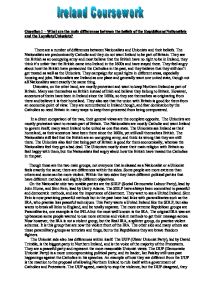 Ireland - What are the main differences between the beliefs of the Republicans/Nationalists and the Loyalists/Unionists?

Question 1 - What are the main differences between the beliefs of the Republicans/Nationalists and the Loyalists/Unionists? There are a number of differences between Nationalists and Unionists and their beliefs. The Nationalists are predominantly Catholic and they do not want Ireland to be part of Britain. They see the British as an occupying army and most believe that the British have no right to be in Ireland, they think it's unfair that the British came into Ireland in the 1600s and have stayed there. They feel angry about how the British have persecuted the Catholics in the past, and they believe that they still don't get treated as well as the Unionists. They campaign for equal rights in different areas, especially housing and jobs. Nationalists see Ireland as one place and generally want one united state, though not all Nationalists want exactly the same thing. Unionists, on the other hand, are mostly protestant and want to keep Northern Ireland as part of Britain. Many see themselves as British instead of Irish and believe they belong to Britain. However, ancestors of theirs have been in Ireland since the 1600s, so they see themselves as originating from there and believe it is their homeland. They also see that the union with Britain is good for them from an economic point of view. They are outnumbered in Ireland though, and fear domination by the Catholics so need Britain in many ways to keep them protected from being overpowered. In a direct comparison of the two, their general views are the complete opposite. The Unionists are mostly protestant want to remain part of Britain. The Nationalists are mostly Catholic and want Ireland to govern itself, many want Ireland to be united as one free state. The Unionists see Ireland as their homeland, as their ancestors have been there since the 1600s, yet still call themselves British. The Nationalists still feel that the British are an occupying army, and think its wrong that they are still there. ...read more.

People saw them as Republican martyrs, they had died for their cause. This caused many people who had been against the rising initially, to change in favour of it. Also, as a result of the rising and its leaders martyrdom, membership of the IRA increased. The Unionists are likely to have known that the rebels were outnumbered by them, but were probably shaken by the Rising. It showed them that a lot of Nationalists were very passionate about their cause and would die for it. The Irish Protestants most likely felt a bit worried, as in Ireland they were the severe minority. If Home Rule cam in, they would do badly. The Easter Rising still affects Nationalists today. The martyrs are still remembered and admired by many. An example of how the rising has continued to affect Nationalists happened during the time when the policy of internment was used. This policy meant that people were put into prison without a trial. The Catholics were mostly affected by this procedure. In Maze prison republican prisoners went on hunger strikes, as they wanted to be treated as political prisoners, and not common criminals. They compared their struggle with that of the Easter Rising, and claimed that they were fighting for freedom. The conditions in the cells were usually terrible; it could be dark for 23 hours a day. Bobby Sands was a senior IRA member. He had been in prison since 1976 and in 1981 went on a hunger strike. He died after 70 days, and around 100,000 people attended his funeral. He had followed the example of the martyrs in the Easter Rising and had put his message across very strongly by doing this. The Easter Rising affected the IRA members most as they followed in the martyrs' examples, but it still affected the rest of the Catholic and Republican population, as it made a lot of them come to support the martyrs' cause. ...read more.

These splinter groups need to join the peaceful forces of the main groups if peace is to be accomplished. Within the Unionist side there are problems between the UUP and the DUP, because the UUP is slightly more compromising. There have also been loyalists feuds which can be violent. A loyalist feud which erupted in Belfast left an 11-year-old in intensive care, after being shot when 'her family's home on the loyalist Ballysally estate in Coleraine was raked with machine-gun fire.' (source B). This is an example of how the splits in Unionism will hinder the peace process. In conclusion, though there have been many significant breakthroughs, there are still obstacles that need to be overcome. One of the obstacles that needs to be overcome is the lack of trust between the sides. For peace to be achieved, complete disarmament is needed, so both sides need to trust each other and give up all weapons. Another thing that should be done is to educate Irish children in a non-biased way, and teach them that they are just like the other side's children, so educate them with peace. This will stop problems such as the trouble of Catholic children being scared of walking through a Protestant playing field because they may fight each other. Another key problem that needs to be put out of the way in order for peace to be achieved is the past. Both sides need to stop bringing up past hurts and looking to the future without the conflict. Marches such as the Orange Order need to be phased out, as this is just aggrivating the Catholics and rubbing the past in their faces. It is reminding them that Protestant William of Orange beat Catholic King James, which stirs up historic hates. With forgetting the past in mind, prisoners that were arrested during the troubles need to be released and their pasts forgotten. This needs to be done to enable Ireland to move on. If disarmament is carried out, trust achieved and the past forgotten, then Ireland will be able to move to a peaceful future. ...read more.