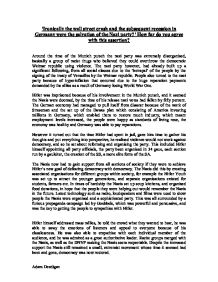 'Ironically the wall street crash and the subsequent recession in Germany were the salvation of the Nazi party?' How far do you agree with this assertion? Around the time of the Munich putsch the nazi party was extremely disorganised, basically a group of racist thugs who believed they could overthrow the democratic Weimar republic using violence. The nazi party however, had already built up a significant following, from all social classes due to the 'betrayal' of the people by the signing of the treaty of Versailles by the Weimar republic. People also turned to the nazi party because of hyperinflation that occurred due to the huge reparation payments demanded by the allies as a result of Germany losing World War One. Hitler was imprisoned because of his involvement in the Munich putsch, and it seemed the Nazis were doomed, by the time of his release nazi votes had fallen by fifty percent. The German economy had managed to pull itself from disaster because of the work of Streseman and the set up of the Dawes plan which consisting of America investing millions in Germany, which enabled them to restore much industry, which meant employment levels increased, the people were happy as standards of living rose, the economy was healthy and Germany was able to pay reparations. ...read more.

Latest technology such as radio, loudspeakers and films were used to show people the Nazis were organised and a sophisticated party. This was all surrounded by a furious propaganda campaign led by Goebbels, which was powerful and persuasive, and was the key to getting the people to sympathise with Hitler. Hitler himself addressed mass rallies, he told the crowd what they wanted to hear, he was able to sway the emotions of listeners and appeal to everyone because of his classlessness. He was also able to empathise with each individual member of the audience, and he was admired as a great authoritative leader. Racist groups merged with the Nazis, as well as the DNVP making the Nazis seem respectable. Despite the increased support the Nazis still remained a small, extremist movement whose time it seemed had been and gone, democracy was now restored. In late 1929 the US stock market collapsed, triggering a severe depression in the American economy, resulting in disastrous effect on world economy. America withdrew all investment from Germany, the depression was re-born, and was worse than before, unemployment rose beyond six million, nobody was willing to trust democracy again. ...read more.

Even the Germans who had previously kept faith in democracy after the hyperinflation weren't willing to give it a second chance again. There are many reasons why Hitler and the nazis came to power, for example Hitler's reforming of the party after his release from prison, but without the wall street crash and the events surrounding it, the Nazis would just never have gained enough votes. The majority of people had forgotten about the treaty of Versailles, they weren't looking for hope or a saviour, they didn't need to be saved, they had a good life under the Weimar republic before the events of 1929. Therefore I agree with the assertion that 'Ironically the wall street crash and the subsequent recession in Germany were the salvation of the Nazi party?' because democracy had recovered and standards of living were improving until the wall street crash occurred leaving Germany with nothing once again. As the historian William Carr said 'It is unconceivable that Hitler could never have come to power had not the Weimar republic been subjected to the unprecedented strain of a world economic crisis'. Adam Deedigan ...read more.