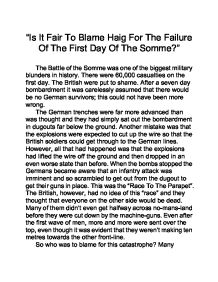 Is It Fair To Blame Haig For The Failure Of The First Day Of The Somme?

"Is It Fair To Blame Haig For The Failure Of The First Day Of The Somme?" The Battle of the Somme was one of the biggest military blunders in history. There were 60,000 casualties on the first day. The British were put to shame. After a seven day bombardment it was carelessly assumed that there would be no German survivors; this could not have been more wrong. The German trenches were far more advanced than was thought and they had simply sat out the bombardment in dugouts far below the ground. Another mistake was that the explosions were expected to cut up the wire so that the British soldiers could get through to the German lines. However, all that had happened was that the explosions had lifted the wire off the ground and then dropped in an even worse state than before. ...read more.

These people had no way of knowing what conditions were really like across the channel. He may well have been given false or insubstantial information about the German defenses and wire. Many people think that Haig could, and should, have worked this out for himself. After all, they knew by now that the Germans were using very defensive tactics, and this would mean that their trenches would be much more well established. Haig never actually visited the front line, though, and so he had no way of truly experiencing what was happening. One might argue that this is unacceptable and that it was his duty to visit his trenches and encourage his men. If he had done so, he would have learnt much more about his army and the enemy's. Instead he remained far behind the lines, probably in a grand French house. ...read more.

It was his idea that the soldiers should walk across to preserve their formation, as he did not trust them as much as they deserved. Haig should have seen that this was a bad strategy and, either reconsidered it with Rawlinson or overruled it completely. Even after the initial advance failed, he made no recorded attempts to stop the attack, leaving the following waves to walk out to their deaths. It would have been extremely hard for him to call back the soldiers who had already gone over-the-top, but he could have at least tried to stop the subsequent waves of infantry after it became obvious there was no hope of success. To conclude, I think that it is fair, to some extent, to blame Haig for the failure of the first day of the Somme, but it is also important to remember that there were others involved as well. I think that an accumulation of mistakes and negligent assumptions combined with Haig's lack of judgment and logical thinking led to the disaster of the Battle of the Somme. ...read more.