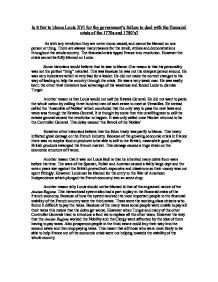 Is it fair to blame Louis XVI for the government's failure to deal with the financial crisis of the 1770s and 1780's?

Is it fair to blame Louis XVI for the government’s failure to deal with the financial crisis of the 1770s and 1780’s?

As with any revolution they are never mono-causal, and cannot be blamed on one person or thing. There are always many reasons for the revolt, strikes and demonstrations throughout the whole country. The financial crisis tipped France into revolution. However the crisis cannot be fully blamed on Louis.

Some historians would believe that he was to blame. One reason is that his personality was not the perfect “king” material. This was because he was not the sharpest person around. He was very indecisive which is very bad for a leader. He did not make the correct changes to his way of leading to help the country through the crisis. He was a very weak man. He was easily bent; the other rival ministers took advantage of his weakness and forced Louis to dismiss Turgot.

Another reason is that Louis would not call the Estates-General. He did not want to panic the whole nation by calling three hundred men of each estate to meet at Versailles. He instead called the ‘Assemble of Nobles’ which concluded that the only way to pass the new laws and taxes was through the Estates-General. It is thought by some that this unwillingness to call the estates general caused the revolution to happen. It was only called once Necker returned to be the Controller General. This delay caused ‘the Revolt of the Nobles’

However other historians believe that the Eden treaty was partly to blame. This treaty inflicted great damage on the French industry. Because of the growing economic crisis in France there was no surplus food or products to be able to sell to the British, meanwhile good quality British products swamped the French market. This damage caused a huge strain on the economic structure of France.

Another reason that it was not Louis fault is that he inherited many debts from wars before his time. The wars of the Spanish, Polish and Austrian caused a fairly large dept and the seven years war against the British proved both expensive and disastrous so their money was not spent fittingly. However Louis can be blamed for the entry to the War of American Independence which plunged the French economy into an acute drop.

Another reason why Louis should not be blamed is that of the engrained nature of the Ancien Regime. This hierarchical system also had a part to play in the financial crisis of the French economy. Because of how the system worked the most important people to the financial stability of the French country were the third estate. These were the working class citizens who found it difficult to pay the taxes. Because of the many taxes some people were unable to pay all their taxes this means that the debts get worse. However when Turgot and many of the other Controller Generals tried to introduce a land tax to replace all the other taxes. However the way that the Ancien Regime worked the Nobility and the Clergy were affronted by the idea of them having to pay taxes. Also prosperous people in the third estate could buy their way into the second estate and then stop paying taxes. This meant that all those who were most likely to be able to help France out of the economic crisis were not helping towards the stability of the whole country.

As you can see there are many reasons why Louis XVI should not be blamed for the ineptitude of the French government in a time of financial crisis. However he cannot be totally acquitted. He has a very major part to play in the financial crisis.