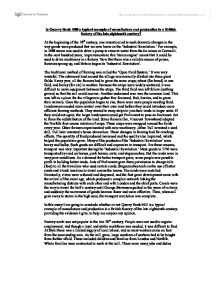 Is Quarry Bank Mill a typical example of manufacture and production in a British factory of the late 18th century?

Is Quarry Bank Mill a typical example of manufacture and production in a British factory of the late eighteenth century? At the beginning of the 18th century, one invention led to such dramatic changes in the way goods were produced that we now know as the 'Industrial Revolution.' For example, in 1698 steam was used to drive a pump to remove water from the tin mines in Cornwall. In the next hundred years, improvements to this 'steam engine' meant that it could be used to drive machinery in a factory. Now that there was a reliable source of power, factories sprang up, and Britain began its 'Industrial Revolution'. The traditional method of farming was called the 'Open Field System.' It was very wasteful. The advanced land around the village was normally divided into three great fields. Every year, all the farmers had to grow the same crops; wheat (for bread) in one field, and barley (for ale) in another. Because the strips were widely scattered, it was difficult to move equipment between the strips. The third field was left fallow (nothing grown) so that the soil could recover. Another underused area was the common land. This was left as a place for the villagers to gather free firewood, fruit, berries, and to graze their animals. Once the population began to rise, there were more people needing food. Landowners needed more control over their own land before they could introduce more efficient farming methods. They started to swap strips to join their lands in larger units. ...read more.

I think the museum does slightly tell us about the period of time we want, because there were books with dates going as far back as 1858, like an attendance book. At Styal Mill the living conditions were generally better than that experienced in the towns. The houses that Samuel Gregg built at Styal were similar to those built in the towns, with inadequate sanitation, such houses quickly became slums. Styal's houses were separated by courts and alleys; 'back to back' type houses were never built here. "The houses at Styal are commodious, clean, whitewashed and in every respect superior to the habitations for a similar class of labourers in the town...which are filthy." (3) At Quarry Bank Mill, each cottage had is own allotment, and every house had a privy. Many of the houses were totally undrained, and stagnant waste piled up around them. The rents paid at Styal were lower than in the towns as they were based on agricultural rates. Records show that an average of 8 people lived in each cottage in Styal (1844 - 53). The cellars were rented separately, usually to widows. It is possible that Samuel Gregg saw Quarry Bank as a self-contained operation. Unlike those in the Styal, the cellars in the urban slums were rented out to large numbers of the poorest people, so overcrowding was common. "There are eight women in the apartment and nine children." (4) There was a village shop that opened in the 1820s, and stocked the staple foods of factory workers all over England like flour, potatoes, and bacon. ...read more.

Overall, I don't think Quarry Bank Mill was a typical cotton mill. I think this because; there was more attention to the employees, and the money that the Gregg's were making. Also, they concentrated on the state of living for the apprentices, and their education. It seems they wanted them to gain knowledge, by listening rather than actually doing it. The Gregg's also imported a doctor for the Apprentices to ensure they had their health checked regularly, and to guarantee a safe environment for the children and guarantee good health. I think the Mill was brilliant as a museum, as it was very informative, interesting, and enlightening. The presentations the guides gave us were very useful, and also very interesting. I think the visit was situated around the 18th century and the 19th century, as the records of attendance was shown, and the medical records left behind by the doctor was consumed. When looking at the museum, I thought it was not possible to study the specific time period (early nineteenth century), as there were many anachronisms, such as modern displays of tourists, and electrical devices. I personally think we need to look at other mills to justify the facts upon the education, the wages, discipline, and living/working conditions, to find the average upon all types of mills. (1) Thomas Clarke of Leicester, 1833 (2) An apprentice from Cressbrook Mill (3) P. Gaskell, 1836 (4) James Skinan (5) Thomas Clarke of Leicester, 1833 (6) Superintendents of the Apprentice House, George and Elizabeth Shawcross, 1833 (7) Mr and Mrs Shawcross, 1833 (8) Thomas Priestly, 1806 (9) Thomas Clarke of Leicester, 1833 By: Melissa Southward ...read more.