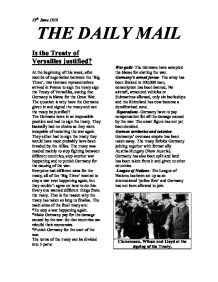 Is the Treaty of Versailles justified?

19th June 1919 THE DAILY MAIL Is the Treaty of Versailles justified? At the beginning of this week, after months of negotiation between the 'Big Three', two German representatives arrived in France to sign the treaty sign the Treaty of Versailles, stating that Germany is blame for the Great War. The question is why have the Germans given in and signed the treaty and can the treaty be justified? The Germans were in an impossible position and had to sign the treaty. They basically had no choice as they were incapable of restarting the war again. They either had to sign the treaty they would have most probably have been invaded by the Allies. The treaty was needed mainly to stop fighting between different countries, stop another war happening and to punish Germany for the causing of the war. Everyone had different aims for the treaty, all of the 'Big Three' wanted to stop a war ever happening again, but they couldn't agree on how to do this. Every one wanted different things from the treaty. That is the reason why the treaty has taken so long to finalise. ...read more.

I on the other hand think that Germany deserve to pay for all of the suffering and damage they have caused. They are to blame for the war so it is only right that they accept all the punishment. Some Germans are saying that they only signed the treaty because they thought it was Wilson's '14 points'. What do these points have too do with anything, they are Wilson's points not anyone else's. Wilson's problem is that he talks a lot about eastern and Central Europe, yet he knows very little about the area. I only want a peace that will be just, but it should be stern because the occasion demands it. All I want is too protect the future against another war like this. Although if I had my way though the treaty would be much harsher. I my opinion the Germans are getting off very lightly." Clemenceau may think that the treaty is not harsh enough, but there are probably very few if any Germans who agree with him. The news of the treaty has been greeted by horror and outrage throughout the whole of Germany. ...read more.

We are being treated like a defeated state and I don't really think that we lost! I'm furious that our government was not even represented at the talks and that we are being forced to accept a harsh treaty without any choice or even a comment." So can the treaty of Versailles be justified? Well I would say that yes it can. Germany started the war so it is only fair that they should accept the punishment. The Germans believe that they should be treated fair, but just look at the way they treated the Russians in the treaty of Brest-Litovsk. Germany is not the only country that has been effected by the war other countries too have been destroyed and lost their economy also. On the other hand did the Germans really need to be treated so harshly? The terms of the treaty have been done with hatred and revenge for the Germans. I think that perhaps the best solution for the problem of would have been to wait a while before deciding how to treat the Germans. They allies may have got revenge and punished the Germans. But have they pushed the Germans too far? Will the Germans possibly want revenge in the future? We will just have to wait and see for the answer to that question. Reported by Natalie watkin ?? ?? ?? ?? ...read more.