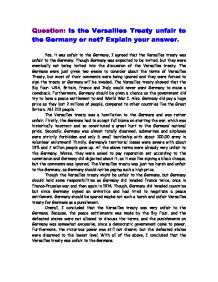 Is the Versailles Treaty unfair to the Germany or not? Explain your answer.

The Versailles treaty was a humiliation to the Germans and was rather unfair. Firstly, the Germans had to accept full blame on starting the war, which was historically incorrect and so constituted a great hurt to the Germans' national pride. Secondly, Germany was almost totally disarmed, submarines and airplanes were strictly forbidden and only 6 small battleship with about 100,00 army in volunteer enlistment! Thirdly, Germany's territorial losses were severe with about 13% and 7 million people gave up. All the above terms were already very unfair to the Germany. ...read more.

Though, Germany did invaded countries but since Germany signed an armistice and had tried to negotiate a peace settlement, Germany should be spared maybe not such a harsh and unfair Versailles treaty for Germans as a punishment. Overall, I concluded that the Versailles treaty was very unfair to the Germans. Because, the peace settlements was made by the Big Four, and the defeated states were not allowed to discuss the terms, and the punishments on Germany was somewhat excessive, since a democratic government came to power. Furthermore, the victorious power was still not disarm, but the defeated states were disarmed to the lowest level. With all of the above, I concluded that the Versailles treaty was unfair to the Germans. ...read more.