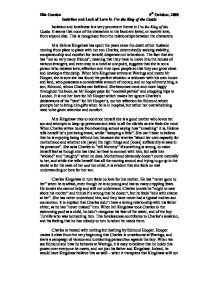 Isolation and loneliness is a very prominent theme in I'm the King of the Castle. It seems that none of the characters in the back are loved, or receive love, from anyone else. This is recognised from the relationships between the characters. Mrs Helena Kingshaw has spent the years since the death of her husband moving from place to place with her son Charles, determinedly seeking stability, companionship and comfort for herself, desperate not to be alone. The fact that she has "not so very many friends", meaning that they have to move into the houses of various strangers, and even stay in a hotel at one point, suggests that she is not a person who radiates love, affection and trust upon people so that they can grow close and develop a friendship. When Mrs Kingshaw arrives at Warings and meets Mr Hooper, she is sure she has found the perfect situation: a widower with his own house and land, who possesses a considerable amount of money, and on top of everything, a son, Edmund, whom Charles can befriend. ...read more.

She has never understood him, and they have never had a typical mother-son connection. It is implied that Charles didn't have a loving relationship with his father either, as he has "never missed" him. When Mr Kingshaw took Charles to the swimming pool as a child, he didn't recognise his fear of the water, and of the boy Turville who was tormenting him. This lovelessness contributes to Charles's isolation, and his feeling that he has nobody to turn to when he needs them. Charles is treated with nothing but loathing by Edmund Hooper. Hooper makes it clear from the very beginning that Charles is unwelcome at Warings, and starts a campaign of vicious and unrelenting persecution against the boy. When we see Edmund and how he behaves at Warings, it is easy to believe that he holds this power over everyone he meets, and not just his father and Kingshaw. Indeed, he would have Kingshaw believe this as well - when it transpires that Kingshaw will not be going back to his "school for poor people" which he loves so much, and will instead be going to Edmund's school, Hooper takes the opportunity to incite real dread in ...read more.

He has been so repressed his whole life - by his father not letting him go outside to play, shirtless, with the local children as a child, and, later, the "politeness" of his loveless marriage to the late Ellen Hooper - that he is thrilled by the possibility of escaping "the niceties and restraints" with which he has lived his life up until now. He feels that Mrs Kingshaw's coming to live with him is an opportunity to "bridge the gap between fantasy and life", to forget his usual severity and reticence. The writer shows the characters' loveless, isolated existence with a particular writing style. It is a third person narrative - giving an impression of detachment - which focuses on the opinions and thoughts of these characters. There is little flowery, emotive language, which adds to the deadened, lonely tone of the book, reflecting what the characters are experiencing at the time. The lovelessness and loneliness shown in the relationships between the characters in I'm the King of the Castle, and the way Susan Hill portrays this, is very noticeable and very important in understanding their feelings and actions throughout the book. ?? ?? ?? ?? Ella Gordon 9th October, 2008 Isolation and Lack of Love in I'm the King of the Castle ...read more.