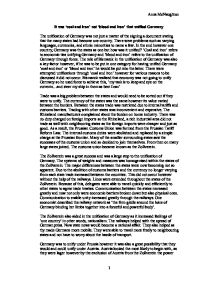 It was 'coal and iron' not 'blood and iron' that unified Germany The unification of Germany was not just a matter of the signing a document stating that the many states had become one country. There were problems such as varying languages, currencies, and ethnic minorities to name a few. In the end however one country, Germany was the states as one but how was it unified? 'Coal and iron' refers to economic ties unifying Germany and 'blood and iron' refers to the unification of Germany through force. The role of Bismarck in the unification of Germany was also a key factor however, if he was to be put in one category for having unified Germany 'coal and iron' or 'blood and iron' he would be put into the latter. There were attempted unifications through 'coal and iron' however for various reasons to be discussed it did not occur. Bismarck realised that economy was not going to unify Germany so he used force to achieve this, 'my task is to keep and eye on the currents...and steer my ship in them as best I can' Trade was a big problem between the states and would need to be sorted out if they were to unify. The currency of the states was the same however its value varied between the borders. ...read more.

The first and failed attempt to unify was in 1848. It was in the form of a revolution from the people. They were unsatisfied, as it had become very hard as a peasant to make a living. Many owed feudal dues to landowners; others were landless who worked for Junkers, landowning military aristocracy. Not only were working conditions less than favourable, living conditions were worse. This caused resentful feelings among the peasants. News of the overthrow of King Louis-Philippe in France spread revolution in many small South-West German states which then spread north. From these revolutions, a Vorparlament formed to decide political changes of Germany and to create a 'united Germany'. It failed however as it largely represented one walk of life, that with university degrees. There were only a few who actually represented the majority of Germany therefore voices of a large group in Germany would not be heard as an overall majority. The members who were elected could not even find a majority among themselves. It looked less and less likely that the Frankfurt parliament would be uniting Germany. This was not an attempt at unification however was the first time a wish on the part of Prussia was shown to unify the states. The second and also failed attempt to unify Germany took place in 1851. ...read more.

Political loyalty however still lay with Austria, as was reflected. A seven week's war with Austria took place. Austria had a war on two fronts and with Prussia, their weapons did not match theirs. She was finally defeated at the Battle of Sadowa. Prussia now gained political loyalty as they were to dictate the terms of the peace treaty. Now Prussia had not only economic unity under the Zollverein but political through the treaty. This treaty abolished the Bund and Austria was excluded from the North German Confederation. By this evidence it can be seen that 'blood and iron' was the main factor which unified Germany. It is hard to conclude however that it was only military force. Without economic unity the states might never have united behind Prussia and just seen her as a tyrant, not a leader. The weapons for war with Austria would not have been available and it also created a great sense of nationalism within the states, permitting success in war. Through war Bismarck was able to unite Germany politically under Prussia as well. War with Austria was necessary as Bismarck needed to show that she was weak and should not be supported, so unity under Prussia would be achieved. Solely 'coal and iron' did not succeed in unification but with the help of Bismarck and 'blood and iron' this was possible. Anna McNaughton 1 ...read more.