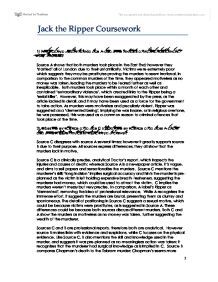 Jack the Ripper Coursework 1) What can you learn from Source A about the murders of Martha Tabram and Polly Nicholls? Source A shows that both murders took place in the East End; however they 'startled' all of London due to their unfamiliarity. Victims were extremely poor which suggests they may be prostitutes proving the murders to seem irrational. In comparison to the common murders of the time, they appeared motiveless as no money was taken, leading the murders to be feared further as well as inexplicable. Both murders took place within a month of each other and contained 'extraordinary violence', which created links to the Ripper being a 'serial killer'. However, this may have been exaggerated by the press, as the article lacked in detail, and it may have been used as a force for the government to take action. As murders were motiveless and peculiarly violent, Ripper was suggested as a 'demented being', implying he was insane, or in religious overtone, he was possessed, this was used as a common reason to criminal offences that took place at the time. 2) Does the evidence of Source C support the evidence of Sources A and B about the Ripper murders? Explain your answer. Source C disagrees with source A several times; however it greatly supports source B due to their purpose. All sources express differences, they all show that the murders lack in motive. Source C is a clinically precise, analytical Doctor's report, which inspects the injuries and causes of death; whereas Source A is a newspaper article. ...read more.

It shows a specific case, whereas E shows usual issues which could be applied to all crimes of the time. 4) Use sources F and G, and your own knowledge, to explain how the police tried to catch Jack the Ripper. Source F shows the police used leaflets to gain information, which shows their reliance on voluntary information. The phrase 'Should you know of any person to whom suspicion is attached', suggests the police profiled suspects from Whitechapel, by their appearance as well as actions. The degeneration theory was a belief of the time; therefore the police may have unintentionally made references to it. Lombroso theory, suggested that criminals had certain physical features, a practice which may have been used lazily at the time. However the leaflet was not their primary method as it was used after 3 murders had taken place without a solution, therefore this hints a level of desperation in their manner. They were not accustomed to solving crimes of this nature, and their main aims were of prevention. In order to do this, they increased patrols on the streets, they turned to following suspects, and using disguises to catch suspects in the act. However this practice was unsuccessful. The Home Secretary states that the police had not used the reward system for years, however the rewards were offered for the first two murders, showing that the Home Secretary (source G) is not very reliable. The false information could be because the HS was isolating itself from poor practice, or the police force was violating the HS' laws. ...read more.

The police also used forensic evidence to further their search; they studied coroners and doctors reports, as is shown in sources B and C. However the time in which the murders took place meant that scientific knowledge was not particularly advanced or practiced, so their means of gaining evidence was very basic. While forensic evidence was becoming important, there was very little concept of DNA testing and many walls were often white washed, diminishing all evidence which may have been present. These mistakes are now considered very basic; however this was one of the first serial killers the police had to deal with. In terms of general crime the police aimed to prevent it, therefore they had to adapt their methods in order to catch the criminal. However, many standard methods were still used such as increasing patrols on streets, and dressing as prostitutes to catch the Ripper, these practices did not prove successful but were carried out due to the lack of method adaption. They also attempted to prevent murders, however sources H and A highlight an aspect of difficulty the police faced. Both sources state the peculiar manner of the murders and the lack of motive behind it. Not only was this a type of case foreign to the police, but the murders were very structured, providing the police with limited direct evidence. Although many standard methods remained, the police tried different methods, such as gathering eye witness information, and forensic evidence; however various factors slowed down the potential success of their new methods, such as the nature of Whitechapel, the premature scientific basis and the immensity of the crime. ?? ?? ?? ?? 1 ...read more.