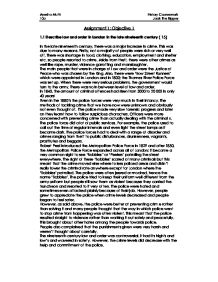 Assignment 1: Objective 1 1.1 Describe law and order in London in the late nineteenth century (15) In the late nineteenth century, there was a major increase in crime. This was due to many reasons. Firstly, not a majority of people were rich or very well off. There was shortage in food, clothing, education, employment and shelter etc. so people resorted to crime. Aside from theft, there were other crimes as well like rape, murder, violence garrotting and manslaughter. The main people that were in charge of law and order were the Justice of Peace who was chosen by the King. Also, there were 'Bow Street Runners' which were appointed in London and in 1800; the Thames River Police Force was set up. When there were very serious problems, the government would turn to the army. There was no in between level of law and order. In 1840, the amount of criminal offences had risen from 5000 to 20 000 in only 40 years! Even in the 1880's the police forces were very much in their infancy. The methods of tackling crime that we have now were unknown and obviously not even thought of. The police made very slow forensic progress and later on they learnt how to follow suspicious characters. Officers were more concerned with preventing crime than actually dealing with the criminals. The police force did a lot of public services. ...read more.

We can see from Source A that the victims were described as 'the poorest of the poor' and that both the murders of Polly Nichols and Martha Tabram were described as 'the work of a demented being'. The people that 'Jack the Ripper' killed were prostitutes. This could be because prostitutes were only into their money and they were a very vulnerable target. Because prostitution was illegal anyway, the prostitutes used to roam around in the darker areas of London where they were less likely to be caught, and more likely to get raped or, like the 'Ripper' liked to do, murdered and mutilated. The media also made the whole 'Ripper' murders very big of an issue. If they were a very simple stabbing or shooting or any other form of very simple killing, the media would not have made such a big fuss as they did with the 'Ripper' murders, because of the vile, disgusting way they were killed. To have your organs carefully taken out with blood everywhere was not something normal to here in the papers. Nobody knew what the murderers motive was or who he was. His name, 'Jack the Ripper' created an even bigger suspicion because no one was aware or had any clue about anything about him. As the murders increased and the letters from the anonymous 'Jack the Ripper' increased, the British people became more and more scared and fearful. ...read more.

Apart from this, there was also Jack himself. The area in which he worked was perfect, and the people he targeted were even better. The poor part of London, where the prostitutes used to hang about, risking their own lives to men they have never met before could not be a better place! His nighttime duty was to search for his prey and attack. He knew exactly what to do and how to do it. Some say that he had some medical background which made it all the more better for him. He was quick, witty, and aware of all that was going on. He targeted only the vulnerable and did his silent deeds only in the darkest, dirtiest places where he knew he was not to be caught. Jack had the best environment for his murders aswell as the perfect shaky pillars of the police force. Also, back then; there was not much technology, as we have now. A witty murderer like Jack would not have been caught with such little technology. His own intelligence also mounted to why he was not caught, however, I believe that he got lucky because he knew what he was after. If there were any slight adjustments to his plans, he may have been caught and I would not be writing this essay. Jack the Ripper made history, being Britain's first serial killer not to be caught. Nobody knows how he got away, but there were many factors which affected Jack's lucky get-away! ?? ?? ?? ?? Ayesha Mufti History Coursework 10a Jack The Ripper ...read more.