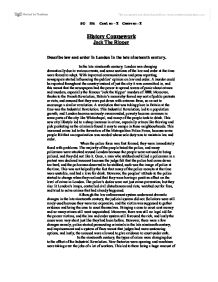 History Coursework Jack The Ripper Describe law and order in London in the late nineteenth century. In the late nineteenth century, London was changing dramatically due to various events, and some sections of the law and order at the time were forced to adapt. With improved communications and press reporting, newspapers started influencing the publics' opinion on law and order. A murder could be reported throughout the country instead of just the city it was committed in, and this meant that the newspapers had the power to spread waves of panic about crimes and murders, especially the famous 'Jack the Ripper' murders of 1888. Moreover, thanks to the French Revolution, Britain's monarchy feared any sort of public protests or riots, and ensured that they were put down with extreme force, so as not to encourage a similar revolution. ...read more.

This was not helped by the fact that many of the police recruits at the time were unstable, and had a love for drink. However, the peoples' attitude to the police started to change when they realized that they were having a positive effect on the level of crime in London. The police's duties were not just crime prevention, but they also lit London's lamps, controlled civil disturbances and riots, watched out for fires, and tried to solve crimes that had already happened. Although the law enforcement system underwent dramatic changes in the late nineteenth century, the judicial system did not. Solicitors were still rarely used because they were too expensive, and the victim was supposed to gather evidence and bring the case to court themselves. Bringing a case to court cost money and so many crimes still went unpunished. ...read more.

Another reason there was so much pick pocketing, was because there were larger cities, and larger crowds which made it easier to steal. Moreover, old crimes like highway robbery died out due to increased traffic and more patrols. They were replaced by new crimes like fraud, and robbing travellers on trains. Fraud began due to the huge new business ventures taking place around the country, and even counterfeiting and smuggling became more prominent. All in all, the system of law enforcement underwent dramatic change during the nineteenth century, with the introduction of the Metropolitan Police Force, and although the judicial system did not change much, the changes in the policing and the increased number of criminals sentenced to imprisonment are crucial, as these were important steps in the development of the system of law and order. Moreover, during this period, the publics' attitude to crime and punishment began to change and start to resemble what it is today. ?? ?? ?? ?? SG 10A Cand. no - X Centre no - X ...read more.