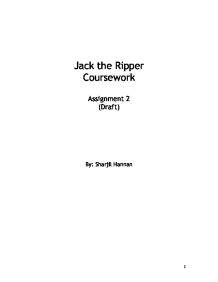 What can you learn from Source A about the murders of Martha Tabrum and Polly Nicholls?

one can find in Source A and B. Since Source C is a report of Dr. Frederick Blackwell on the body of one of the victims, Elizabeth Stride, it describes accurately of what happened on the body. It says that the victim had a ‘long incision’ on the neck, which was two and a half inches in length and as a result it cut ‘the windpipe completely in two’. This nature of the crime would come to support the evidence provided in Source B, a Coroner’s report of the death of Annie Chapman, who suggested that the murderer had ‘considerable anatomical skill and knowledge’. He also continues to describe that the murderer could not have been ‘unskilled’ or ‘a mere slaughterer of animals’, as the murders were carried out with much accuracy, also told in Source A. Therefore, the nature of the crimes described in all three of the Sources seem to correlate and show that the murderer was a person out of the ordinary or ‘demented’, stated in Source A.

How useful are Sources D and E in helping you to understand why the Ripper was able to avoid capture?

A.         Source D tells us that the Ripper could’ve been wearing a ‘deerstalker hat’ and a ‘dark coat’. This form of apparel, along with the description that he was ‘shabby genteel’ and looked like a ‘foreigner’ does not seem to make the man a murderer. However, some descriptions in Source D are vague, such as he was ‘a little taller than the deceased’ and ‘a man over forty’ does not give one useful information on how the Ripper could’ve avoided capture. Also, Source D is only the evidence provided by Elizabeth Long who was describing a man that she saw talking to Annie Chapman before she was killed. This decreases the reliability of the Source as there is no direct evidence that it was the man she saw is the Ripper and only a presumption. On the other hand, Source E shows that the police force in the area of the murders were not strong. Also, the police are blamed for not ‘strengthening’ the force and taking immediate action to search for the murderer after the first murder. This lack of immediacy led to the second murder. This gives us one reason for how the Jack the Ripper was able to escape. Source E also informs one that the streets of Whitechapel are ‘a network of narrow, dark and crooked lanes’. This shows that the road-structure of the Whitechapel enabled Jack the Ripper to lose himself before he could be caught by the police. However, Source E is only a part of an article published in a local newspaper and does not provide any facts to consolidate the reasons regarding the escape of the Ripper.

Use Sources F and G, and your own knowledge, to explain how the police tried to catch Jack the Ripper.

Q5. Study all of the sources

‘The police were to blame for not capturing Jack the Ripper’

Use the sources and your own knowledge to explain whether you agree with this view.

mainly the fault of the police that Jack the Ripper was able to run away. First, one must look at limitations of the Metropolitan Police force in the 19th century. At a time when the police received no help from forensic science, the only way to catch a murderer on the streets is to catch him red-handed, or if a suspect confesses. Therefore, it was always going to be hard to catch Jack the Ripper, especially since he was regarded as a ‘demented being’ because of the brutality of the murders. One would also have to consider the harsh conditions of the streets of Whitechapel where the police had to work in. The smoke and stinking gas fumes ensured an easy escape for the Ripper, destabilizing the police force. As Source E and I show that the roads and streets of Whitechapel were ‘connected by a network of narrow, dark and crooked lanes’. The maze-like roads were so close together that it made police circulation difficult. To add to that problem, there was also no tram system in Whitechapel, making it harder for the police move swiftly from place to place. The lack of evidence also played a vital role in the police force’s inability to catch Jack the Ripper. An example of this is shown in Source D, where Elizabeth Long gives the description of a man she saw speaking to Annie Chapman before she got killed. Even though she gives several details of the man, she was not completely sure as she said things like, ‘I think’,‘but I cannot be sure’ and ‘as well as I could make out’. The fact that there was no reward on offer, clearly stated in Source G that it was ‘discontinued some years ago’, ruled out the chance of an accomplice giving vital information about the Ripper to the police. The inexperience of the police in such detective work, especially tracking a serial killer who had ‘considerable anatomical skill and knowledge’ and whose victims had ‘been of the poorest of the poor’, made the case a mystery that was likely to be unsolved. However, there were several instances in the course of the investigation where the police were solely to be blamed. The police had a strong feeling that the Ripper was from Whitechapel, indicated clearly in Source F, a police notice saying that the Ripper was supposedly ‘someone residing in the immediate neighbourhood’. This restricted the police to only question people in the local area. Their narrow line of questioning also led to them questioning butchers and slaughterers, even though Source B, a coroner’s report clearly stated that ‘No mere slaughterer of animals could have carried out these operations’. Another factor was that the police forces in London did not join to work together, due to the petty competition they had between themselves. It is always a debate that sharing evidence, ideas and working together could have increased the chances of Jack the Ripper being caught. Overall, comparing sides of the argument, I feel that the police should not be blamed for not capturing Jack the Ripper. Even in these days when police use DNA fingerprinting and have the latest technology of forensic evidence still have a difficult time to track down criminals. Therefore, it would be nearly impossible in 1888 to catch a mysterious killer, when the police could not even manage a proper artist’s impression of the murderer, to catch Jack the Ripper.