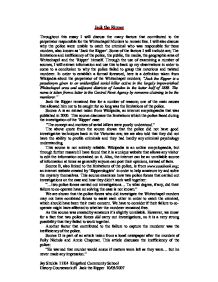 Jack the Ripper - How and why did he evade capture?

Jack the Ripper Throughout this essay I will discuss the many factors that contributed to the perpetrator responsible for the Whitechapel Murders to remain free. I will also discuss why the police were unable to catch the criminal who was responsible for these murders, also known as 'Jack the Ripper'. Some of the factors I will include are; The limitations and inefficiency of the police, the public, the media, the geographic area of Whitechapel and the 'Ripper' himself. Through the use of examining a number of sources, I will extract information and use this to back up my observations in order to come to a conclusion to why the police failed to grasp this notorious and twisted murderer. In order to establish a formal foreword, here is a definition taken from Wikipedia about the perpetrator of the Whitechapel murders; "Jack the Ripper is a pseudonym given to an unidentified serial killer active in the largely impoverished Whitechapel area and adjacent districts of London in the latter half of 1888. The name is taken from a letter to the Central News Agency by someone claiming to be the murderer." Jack the Ripper remained free for a number of reasons; one of the main causes that allowed him not to be caught for so long was the limitations of the police. ...read more.

Source J is the iconic "Dear Boss" letter that is one of the most well-known letters throughout history, the message is dated September 25th 1888 but was postmarked and received on September 27th 1888. Scotland Yard did not receive it until September 29th 1888. As the letter was sent directly to the Central News Agency it was treated as a hoax at first, but it wasn't forwarded to the police until 2 days later. This may have delayed a major point in the investigation as the letter could possibly be real. Probably the most unreliable source out of them all, Source J is most likely a hoax letter but there is a slim chance that it could be legitimate, but, we do not know the real sender. Source K is a headline from The Star newspaper and was published on the 5th of September 1888: "LEATHER APRON THE ONLY NAME LINKED WITH THE WHITECHAPEL MURDERS" This headline or story was produced to give information to the public about the possible suspects. The media often caused a stir as their news was not always helpful, they gave away too much information which caused the public to panic and go around accusing innocent people such as butchers due to their profession being linked with the media's accusations. ...read more.

As forensic was not available, the only way to catch a criminal and prosecute them with sufficient evidence was to catch them in the act, which was frankly unacceptable as there was not nearly enough policemen to patrol every street every second of the day. Their understanding on the motives and psychology of criminals was very poor, and this heightened their inability to catch the murderer. Also, the media and public exacerbated, or 'sensationalised' the situation by sending many hoax letters and failed to fully co-operate with the police force. Due to the media's perseverance to keep the public in a state of panic, in order to sell their papers, the investigation into the Whitechapel murders met many obstacles that were unnecessary and may have seriously damaged the chances of catching the murderer. Lastly, the geographical area of Whitechapel may have also contributed to the murderer remaining free. Through neglect it was obvious that something like this was bound to happen at one point, described as "a breeding ground for evil" such an occurrence was unavoidable as the area was greatly infested with crime. To this day the murderer known as 'Jack the Ripper' has never been named with concrete evidence to fully back-up the accusations, but it is clear that the time period in which the evil acts were committed accommodated the murderers ability to remain free. ?? ?? ?? ?? Jay Shukla 11K4 Kingsford Community School History Coursework #1 Jack the Ripper 10/05/2007 ...read more.