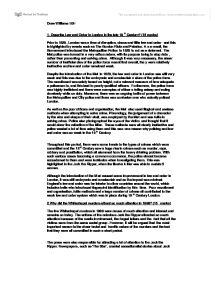 Jack The Ripper - law and order, publicity and why the killer escaped justice.

1. Describe Law and Order in London in the late 19th Century? (15 marks) Prior to 1829, London was a time of disruption, chaos and little law and order and this is highlighted by events such as The Gordon Riots and Peterloo. As a result, the Government introduced the Metropolitan Police in 1829 to act as a deterrent. The Met police was formed in a very adhoc nature, with its purpose being to stop riots, rather than preventing and solving crime. Although it was very necessary, the sheer number of inefficiencies of the police force meant that overall, they were relatively ineffective and law and order remained weak. Despite the introduction of the Met in 1829, the law and order in London was still very weak and this was due to the embryonic and amateurish nature of the police force. The recruitment was solely based on height, not a relevant measure of how adequate a policeman is, and this lead to poorly qualified officers. Furthemore, the police force was highly inefficient and there were examples of officers falling asleep and acting drunkenly while on duty. Moreover, there was an ongoing battle of power between the Metropolitan and City police and there was confusion over who actually policed London. ...read more.

The fact that the Ripper was left anonymous, gave rise to multiple people writing forged letters, claiming to be the infamous murderer. An example is the 'Dear Boss' letter in which the writer claimed to be Jack the Ripper. These claims attracted more attention and intrigue as the public wanted to find out who was committing all these violent deeds. The vicious nature of the murders and the mutilated state which the bodies were left in, is possibly the biggest cause of attention. Jack the Ripper not only murdered his five victims, but he butchered their bodies as well and this caused a strange fascination among the public. There had been very few serial killer cases which involved such a massacre and this uniqueness attracted a lot of focus. This was particularly apparent in the case of Mary Kelley who was found with her thighs and breasts cut off and her face was beyond recognition. The case of Jack the Ripper and his five brutal murders is one of the most famous ever, and he is still known as the most infamous serial killer, however the attacks attracted even more attention at the time. This was due to the forged letters which people wrote claiming to be the murderer, as well as the press involvement and the fact that the victims were from the same social group. ...read more.

Arguably the most significant reason as to why the Ripper was not caught is the poor policing and ineffective methods which they used. The police used methods such as phrenology, the judgement of character by the shape of one's skull, as well as photographing the eyes of the victim because they thought that the eyes would reflect the face of the murderer. These methods are clearly illogical and did not make any progress in the investigation. Moreover, there were examples of officers falling asleep and acting drunkenly while on duty, at the time of the murders. This ineffective policing meant that it was easy for the Ripper to go undetected and get away with his crimes. The combination of futile methods and poor policing meant that the police were unable to gather any evidence against the Ripper and this is a significant reason as to why the Ripper wasn't caught. Jack the Ripper was, and still is, one of the most famous serial killers in history and the case of his five murders will remain one of the great police mysteries as he still remains anonymous. There were many factors which contributed to why he wasn't caught, which include unreliable witness statements, the unhelpful role of the media as well as the location and geography of Whitechapel. However, the most significant reason why the Ripper wasn't ?? ?? ?? ?? Drew Williams 10H ...read more.