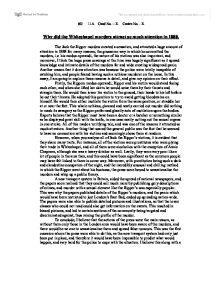 Jack The Ripper. Why did the Whitechapel murders attract so much attention in 1888.

Why did the Whitechapel murders attract so much attention in 1888. The Jack the Ripper murders created a sensation, and attracted a huge amount of attention in 1888 for many reasons; the gruesome way in which he committed the murders, i.e. his modus operandi, the nature of his victims was also important, and moreover, I think the huge press coverage at the time was hugely significant as it spread knowledge and intimate details of the murders far and wide creating widespread panic. Another reason that it drew attention was because the police were totally incapable of catching him, and people feared having such a ruthless murderer on the loose. In this essay, I am going to explore these reasons in detail, and give my opinion on their effect. ...read more.

All of this made a terrifying tale, and was one of the reasons it attracted so much attention. Another thing that scared the general public was the fact that he seemed to have no connection with his victims and seemingly chose them at random. However, when you analyse all of Jack the Ripper's victims, it is evident that they share many traits. For instance, all of the victims were prostitutes who were plying their trade in Whitechapel, and all of them were alcoholics with the exception of Annie Chapman, although she was a heavy drinker as well. Lastly, they were very poor like a lot of people in the area then, and this could have been significant as the common people may have felt linked to them in some way. ...read more.

To conclude, I believe that the actions of the press were the main reason, as without them only those in the London area would have been aware of the murders, and there would be no one to sensationalize them and spread false rumours. This was the first occasion where the press were able to do this, as the new transport system had only just been put in place, and therefore it would have been impossible to predict what would happen, and very hard for the police to cope with the situation. I believe this along with a variety of other reasons was why the Ripper murders attracted so much attention at the time, and it is no surprise that it has become one of the most famous and publicized cases ever. ?? ?? ?? ?? SG 11A Cand No. - X Centre No. - X ...read more.