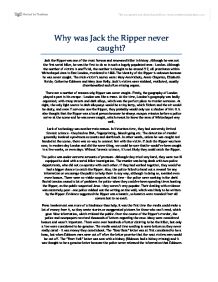 Jack the Ripper - Why was he never caught?

Why was Jack the Ripper never caught? Jack the Ripper was one of the most famous and renowned killer in history. Although he was not the first serial killer, he was the first to do so in such a hugely populated area - London. Although the number of victims is unofficial, the number is thought to be around 5-7, all prostitutes within Whitechapel Area in East London, murdered in 1888. The identity of the Ripper is unknown because he was never caught. The main victim's names were: Mary Ann Nichols, Annie Chapman, Elizabeth Stride, Catherine Eddowes and Mary Jane Kelly. Jack's victims were stabbed, mutilated, usually disembowelled and often missing organs. There are a number of reasons why Ripper was never caught. Firstly, the geography of London played a part in his escape - London was like a maze. At the time, London's geography was badly organised, with many streets and dark alleys, which was the perfect place to murder someone. ...read more.

Racial tension caused a lot of problems for police when they could've been spending times hunting the Ripper, as the public suspected Jews - they weren't very popular. Their dealing with evidence was extremely poor - one police rubbed out the writing on the wall, which was likely to be written by the Ripper. Evidence suggested the Ripper was a lunatic, so lunatics were rounded from all corners but to no avail. Press involvement was more of a hindrance than help. It was the first time the media could make a lot of money from it, so they wrote stories or exaggerated pictures for those who can't read, which gave false information, which mislead the public. Over the course of the Ripper's murder, the police and newspapers received thousands of letters regarding the case. Many were considered hoaxes and wasn't important. There were over hundreds of letter claiming to be the killer, but only a few were considered to be genuine. The media wasted time sending in some letters as they never really cared - it was money they cared about. ...read more.

Jack the Ripper was either extremely clever or very mad, which made it difficult because he doesn't think like a normal person. Jack the Ripper could very well have held regular employment, and even had a wife and children. The true murderer was never suspected by friends, family or co-workers, because he did not fit the profile of the Victorian raving lunatic. With all the evidence, it could be said that Jack the Ripper was extremely careful and very intelligent. In my opinion, I think the main reason why he was never caught was because in Victorian times, forensic science was still at its infancy. I don't think Jack the Ripper could've got away if we had DNA or blood typing, no matter how smart (or mad) he was and with no forensic science, they couldn't pin it on anyone. The attacks were at night so there was no clear description of the killer and the police were not popular at the time, many people loathe them at the time. With all the facts, it was no wonder how Jack the Ripper escaped! The case is still open however, in hopes of solving this mystery. ...read more.