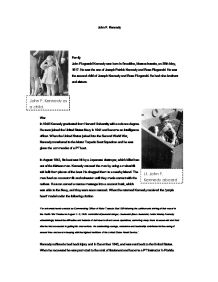 John F. Kennedy Family John Fitzgerald Kennedy was born in Brookline, Massachusetts, on 29th May, 1917. He was the son of Joseph Patrick Kennedy and Rose Fitzgerald. He was the second child of Joseph Kennedy and Rose Fitzgerald. He had nine brothers and sisters. War In 1940 Kennedy graduated from Harvard University with a science degree. He soon joined the United States Navy in 1941 and became an intelligence officer. When the United States joined into the Second World War, Kennedy transferred to the Motor Torpedo Boat Squadron and he was given the commander of a PT boat. In August 1943, his boat was hit by a Japanese destroyer, which killed two out of the thirteen men. Kennedy rescued the men by using a makeshift raft built from pieces of the boat. He dragged them to a nearby island. ...read more.

When he recovered he was promoted to the rank of lieutenant and became a PT instructor in Florida. Early Political Life After the Second World War, Kennedy had wanted to become a journalist before deciding to run for a political office. Before the war, he had never considered about being a politician, because his father had wanted his older brother to become a politician. But Joseph (older brother) was killed during the Second World War. When in 1946 U.S. Representative James Michael Curley vacated his seat in the Democratic district to become mayor of Boston, Kennedy took over and won against his Republican opponent by a large margin. Soon he married Jacqueline Lee Bouvier in September 12, 1953. Presidential Election On January 2, 1960, Kennedy declared his intent to run for president. On Tuesday, November 8, Kennedy defeated Nixon in one of the closest presidential elections of the twentieth century. In January 20, 1961, John Fitzgerald Kennedy (Democrat) ...read more.

Civil Rights When racial equality gained more support in 1962 to 1963, Kennedy reacted by speaking out for the Black Americans and tried to introduce civil rights legislation, but many White Congressmen were against Kennedy's proposal. He accomplished two major things which affects worldwide. The first of these was the Peace Corps. The Peace Corps sent teachers to poorer nations to help increase education levels and boost their economies. The second was the Alliance for Progress, which provided aid in health and education in Latin America. The Bay of Pigs Invasion was an unsuccessful attempt by United States-backed Cuban exiles to overthrow the government of the Cuban dictator Fidel Castro. The Republicans in Congress opposed him, also the Southerners that were in his party. Older white politicians also were against him because of his appointments of young and Black advisers, a lot of people disliked his spending plans on education and the elderly. ?? ?? ?? ?? ...read more.