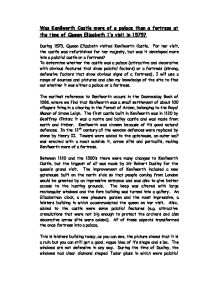 Was Kenilworth Castle more of a palace than a fortress at the time of Queen Elizabeth 1's visit in 1575? During 1575, Queen Elizabeth visited Kenilworth Castle. For her visit, the castle was refurbished for her majesty, but was it developed more into a palatial castle or a fortress? To determine whether the castle was a palace (attractive and decorative with obvious features that show palatial factors) or a fortress (strong, defensive factors that show obvious signs of a fortress), I will use a range of sources and pictures and also my knowledge of the site to find out whether it was either a palace or a fortress. The earliest reference to Kenilworth occurs in the Doomesday Book of 1086, where we find that Kenilworth was a small settlement of about 100 villagers living in a clearing in the Forest of Arden, belonging to the Royal Manor of Stone Leigh. The first castle built in Kenilworth was in 1120 by Geoffrey Clinton; it was a motte and bailey castle and was made from earth and timber. Kenilworth was chosen because of it's good natural defences. In the 12th century all the wooden defences were replaced by stone by Henry II. ...read more.

When it was created it was fit for a queen and was used regularly by the inhabitants of Kenilworth and also the queen herself. The garden comprised of an aviary, a range of plants and fruit trees and the most spectacular of all, a huge 18ft centrepiece. Recently, the English heritage has undertaken construction on the once great gardens, so when I visited the castle I did not see for myself, so I used the internet for sources and research. For 2009, Kenilworth is hoping to re-open the gardens to the public using Robert Langham's description of the gardens in his letter from 1575. The Great Lake This is where the great lake was situated before it was drained. It was used for both palatial and defensive aspects. For the queen's visit, beautiful boats were sent to retrieve her and the queen was welcomed by the "Lady of the Lake", floating on an artificial island in the middle of the waters. It was also used for fishing purposes. Due to the size and depth of the lake, it meant without enemies using boats to sail across, they could not get close to the castle, making it a very good defensive feature. ...read more.

Lunn's Tower has arrow slits similar to the ones at the top of the Keep and this was a defensive tower but the Water Tower was built later, with large windows and window seats and it's arrow slits are purely decorative and are in fact dummy slits - making the Water Tower a palatial feature. Online Source Analysis http://www.celcat.com/kworth/castle.html - '1563 - the fifth year of her reign - Queen Elizabeth I bestowed Kenilworth Castle upon Robert Lord Dudley - her favourite. A year later she titled him Baron of Denbigh and Earl of Leicester. He made extensive additions and alterations to the castle to continue John of Gaunt's transformation of the fortress into a palace. Some of the Norman features were modernised with fashionable Tudor to please Elizabeth. For example, he replaced arrow slits in the Keep with large windows to allow more light into the building.' This source states that Robert Dudley transformed the castle from it's previous fortress position into a palace with many major transformations. In conclusion, I believe that after closely analysing the site, Kenilworth Castle in 1575 was a fortress. I can prove this as all the modifications to Kenilworth were all to make it more attractive (e.g. dummy arrow slits). I did not use many of the sources in the source booklet provided as I didn't believe that they showed the castle's true aspects for me to make a decision. ...read more.