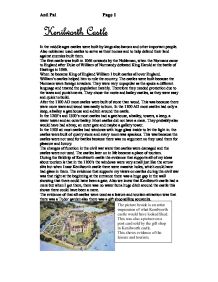 Kenilworth Castle In the middle ages castles were built by kings also barons and other important people. Also nobleman used castles to serve as their homes and to help defend their land against enemies built them. The first castle was built in 1066 onwards by the Nobleman, when the Normans came to England after Duke of William of Normandy defeated King Harold at the battle of Hastings in 1066. When he became King of England William 1 built castles all over England. William's castles helped him to rule the country. The castles were built because the Normans were foreign invaders. They were very unpopular as the spoke a different language and treated the population harshly. Therefore they needed protection due to the taxes and punishments. They chose the motte and bailey castles, as they were easy and quick to build. After the 1100 AD most castles were built of stone than wood. This was because there were more wars and wood was easily to burn. In the 1100 AD most castles had only a keep, a bailey a gatehouse and a ditch around the castle. In the 1200's and 1300's most castles had a gatehouse, a bailey, towers, a keep, a water tower and an outer bailey. ...read more.

Also a great hall was built. This was not used for defence but for luxury. The source that supports this is source 1. This was very typical and reliable because castles were in between wars and luxury. In the 1500's the typical developments in castles were the keep (windows/new entrance), stables, new entrance to castle, Leicester's building and garden. These changes occurred because there were no wars so these changes were used for luxury. The evidence that supports this is that during the 1500's there were fewer arguments so they decided to use the castles for luxury and pleasure. This was very common in all castles. The sources that support my views are sources 6, 7 and 13. These sources are very reliable because there are still some buildings left in Kenilworth castle that are still new (Leicester's Building). In the civil war the typical development of castles was that curtain walls were taken down, the mere was drained and the keep was damaged. This happened because the leaders of the country did not want a rebellion t bring back the king. The evidence that supports this is the damaged keep, the missing gates and the loss of the water in the mere. ...read more.

During the end of the 1500's Kenilworth castle was less important. Source 6 says the 'development of gun powder and cannons made castles less important'. This was because castles could be destroyed more easily. Source 7 shows the castle was used for luxury. The other evidence of castles of being used for luxury is source 13. During the civil war the sources indicate that the castles were slighted due to stop a rebellion against the government to bring back the king. The reliability of the guidebook is very reliable because it has taken evidence from different history books, which are combined to give the real history and not the suggested history of the castle and other castles around England. The reliability of the source book is not reliable as the guidebook because some sources were written years after the events happened and some didn't. The sources that have a more chance of being reliable are the primary sources. Primary sources are sources that are written during the time something has happened and secondary sources are sources, which are written after it has happened. The sources that are primary sources are 2,4,5 &7. The sources that are secondary sources are 1,3,6,8,9,10,11,12 & 13. This means there are many sources in the source guidebook, which could not be true so overall the guidebook is unreliable. Anil Pal Page 1 ...read more.