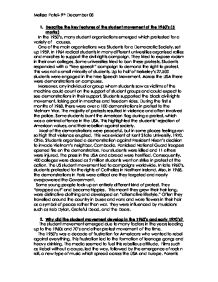 1. Describe the key features of the student movement of the 1960's (5 marks) In the 1950's, many student organizations emerged which protested for a variety of causes. One of the main organizations was Students for a Democratic Society, set up 1959. In 1964 radical students in many different universities organised rallies and marches to support the civil rights campaign. They tried to expose racism in their own colleges. Some universities tried to ban these protests. Students responded with a "free speech" campaign to demand the right to protest. This was not a small minority of students. Up to half of Berkeley's 27,500 students were engaged in the Free Speech Movement. Across the USA there were demonstrations on campuses. Moreover, any individual or group whom students saw as victims of the machine could count on the support of student groups and could expect to see demonstrations in their support. Students supported the black civil rights movement, taking part in marches and freedom rides. ...read more.

2. Why did the student movement develop in the 1960's and early 1970's? The student movement emerged due to many factors in the years leading up to the 1960s and 70's and other protest movement of the time. The 1950's was a decade of frustration for Americans who wanted to rebel against everything. This frustration led to the formation of teenage gangs and heavy drinking. The media seemed to fuel this rebellious attitude. Films such as Rebel without a cause, led the way, followed by the emergence of rock n roll, a new type of music which spread across the USA and Europe. Parents hated it, which made it even more attractive to teenagers. Elvis Presley was also very influential with his tight jeans and gyrating stage act. The 60's continued this rebellion as they young demanded greater freedom in their views and distanced themselves from the older generation and its view of how the young should behave. ...read more.

Many students disagreed with this ideology, and thus protested for anti-war. Additionally, the students protest was a worldwide phenomenon in the 1960's. Student radicalism was not confined to the USA. In the later 1960's there were student protests in Northern Ireland for civil rights for Catholics and in 1968 student demonstrations in France caused enormous damage to cities all over the country. It should be remembered that the bulk of students were middle-class origin. They would have been expected, in previous generations, to support the government in a war. For such people to oppose the government was virtually unheard of. One reason the student movement emerged was because young Americans received a thrill from ignoring the views encouraged by their parents. In conclusion, the student movement appeared in the 1960s and 70s because of the rebellious atmosphere from the 1950s, the wealth of other successful protest movement in the US and worldwide, and the new culture combined with music that emerged at this time. ?? ?? ?? ?? Melissa Patel- 9th December 08 ...read more.