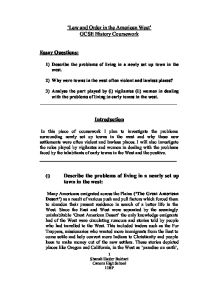 'Law and Order in the American West'

The government was also reluctant to spend money on other areas, which may have improved the quality of life in mining and cow towns therefore reducing the level of crime and violence. These include the promotion of religion and education (constructing churches and schools), sanitation (to reduce the spread of disease so prevalent in these crudely constructed towns), the building of roads and improving housing. The absence of churches and schools most probably made a greater contribution to lawlessness and violence than one may realize. Children and young adults coming up in these towns would be taught nothing except the violence and crime to which they were exposed. The moral values (Dos and Don'ts) and social norms would not be instilled within them at a young age. Given the diversity of the settlers in the west violent conflicts often erupted among the different economic and social groups. (e.g. Cattle ranchers and the homesteaders.) Conflict between Cattle Ranchers and homesteaders: Cattle ranchers came into direct conflict with homesteaders because they required use of the same land to earn money. Early conflict resulted from homesteaders trying to stop cattle drives because they feared damage to their crops or that their animals would contract the dreaded 'Texas Fever' from the Texas Longhorns. When cattle ranchers settled on the plains in the 1870s they wanted the plains to remain an 'open range' so they could move around freely as they wished and were not denied access to water for their cattle. The homesteaders on the other hand were fencing up large areas of the plains with 'barbed wire' to protect their crops from straying cattle and wild beasts. This often brought homesteaders into violent conflicts with cattle ranchers. It also gave rise to the common crime of 'fence cutting'. This occurred in the 1880s and 1890s when homesteaders enclosed large areas of land with a barbed wire fences in an attempt to protect their crops and animals from straying cattle. ...read more.

This meant that children being brought up in these towns would not be taught the acceptable social norms and moral values (the difference between right and wrong) which are usually instilled in children at a young age through interaction with adults, (e.g. teachers, priests/nuns). Even though women were discouraged from entering professional careers dominated by men and usually not given any formal education they played an important role here as teachers in communicating moral values to children and offering religious guidance to compensate for the absence of moral values so prevalent in these early western towns. The crime rate and the level of social immorality were inversely proportional. In this respect women probably helped to reduce the level of lawlessness and violence in early towns in the West. The absence of proper health care facilities especially in the unhealthy and unsanitary conditions (e.g. homesteaders lived in sod houses, which were made of dirt) the inhabitants of early western towns were subject to was a major problem in these towns. In the absence of qualified and reliable doctors as well as basic health care facilities it was the women who tended the sick in these early mining and cow towns of the West. Many early towns in the west proved only to be temporary settlements as mainly itinerant miners who resided there only in hopes of 'striking it rich' occupied them. The more domestic roles of women such as that of a cook, housewife, shopkeeper and farmer led the way to more permanent settlements in the West. While men usually worked claims during the day and the first homesteaders were beginning to settle on and cultivate the plains, women worked on farms, growing crops, rearing animals, raising children, doing housework and preparing food. They also managed businesses and supplies as shopkeepers. These shops led the way to more permanent businesses in Western towns and the fulfilment of their domestic roles led the way to more 'permanent towns'. ?? ?? ?? ?? 1 Shanali Haider Bokhari Canons High School 11BP ...read more.