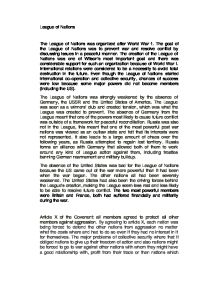 By agreeing to article X, each nation was being forced to defend the other nations from aggression no matter what the costs where and had to do so even if they had no interest in it for themselves. The major problems of collective security where that it obliged nations to give up their freedom of action and also nations might be forced to go to war against other nations with whom they might have a good relationship with, profit from their trade or then nations which could be much stronger than themselves and cause a lot of damage. Collective security was too idealistic it assumed that the force of the world's opinion and the threat of world action would deter aggression. One of the successes the League experienced in was the Aaland islands, these islands were near Finland and Sweden, and both of them want the islands. Neither of them could come up with a decision and they asked the League to adjudicate, their decision was that the League should remain in Finland but no weapons should be kept there. Both countries accepted the decision. ...read more.

The two countries continued to argue over the issue. The League was asked for help to deal with the Vilna situation. The Poles had took over Vilna and the Lithuania could hot persuade the Poles to leave. In the end, Vilna stayed in Polish hands until World War Two. In 1920, the Poles invaded land held by the Russians. The took over nearly 80,000 square kilometers, the League did nothing, because Russia was a communist country. When the Germans failed to pay the reparations, the French and the Belgium's invaded the Ruhr. France was seen as a senior League member, and for the League to do something, it will need a unanimous vote, however France was the one to do it and Britain was a major supporter of her. Despite the amount of failures, the League of Nations did have some success, even though it was overshadowed by the failures. The failures might be because of the indifference of the great powers, which preferred to see their country as the most important matter. However, the successful actions brought a return of peace, which was what the League of Nations was set up to achieve. ...read more.