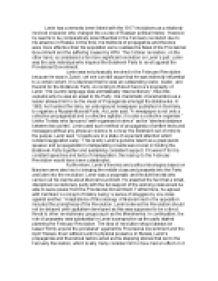 Lenin's Importance in the 1917 Revolutions.

﻿Lenin has commonly been linked with the 1917 revolutions as a relatively involved character who changed the course of Russian political history. However, he seems to be comparatively less influential in the February revolution due to his absence in Russia. At the time, his methods of propaganda and theories were more effective than his opposition as he realises the flaws of the Provisional Government and the suffering caused by WWI. The October revolution, on the other hand, is considered a far more significant revolution on Lenin?s part. Lenin was the sole individual who inspired the Bolshevik Party to revolt against the Provisional Government. Lenin was not physically involved in the February Revolution because he was in Zurich, yet one can still argue that he was indirectly influential to a certain extent. It is disclosed that he was an outstanding orator, leader, and theorist for the Bolshevik Party. According to Robert Service?s biography of Lenin, ?His (Lenin) language was unmistakably insurrectionary?, thus this explains why he was an asset to the Party. His charismatic characteristics as a leader allowed him to be the Head of Propaganda amongst the Bolsheviks. In 1900, he founded the Iskra, an underground newspaper published in Germany, to organise a Russian Marxist Party. ...read more.

Additionally, some Mensheviks such as Leon Trotsky ?joined the Bolsheviks?. This is important due to the fact that without such influential members, the main strategies for the revolution would have never come into play. Through this, Lenin was successful in gathering support of the workers, soldiers and peasants. Furthermore, the main slogan demonstrates the way in which the Bolsheviks were able to combine the demands of all their followers to maximise their appeal. Thus, Lenin is significant to the October Revolution, as he primarily convinced all the others into making the strike possible. The reason why Lenin was capable of persuading these figures was because ?it is impossible to end the war by a truly democratic peace?; therefore, in order to give the people what they desired was to carry out a revolution. Overall, we can acknowledge Lenin?s importance in the October Revolution as he was responsible for the Theses, the founding principles of the revolution. His capability of gaining attention for the party should also be credited because without the support, the revolution would have never taken place. For instance, the amount of support they had in the February Revolution was 24,000 Bolsheviks, Lenin raised this figure to 400,000 by October. ...read more.

This shows that the failures of the Provisional Government giving people paraphernalia to protest about could have been the main factor behind the cause of the October Revolution, which only leaves Lenin insignificant. In general, Lenin has arguably been involved in both revolutions to a certain extent. The propaganda and theories behind the Bolshevik Party leading up to the February Revolution were all works of Lenin. However, some say that Lenin wasn?t really remarkable in the way that he wasn?t physically involved. Also, the diminishing popularity of the Provisional Government, the Tsar?s personality and the effects of WWI had helped him a lot. This is also the case in the October Revolution. His promotion of the April Theses and dedication to the Bolsheviks helped lead to a successful revolution but one must also consider Trotsky?s physical contributions and the failure of the Provisional Government as other factors leading to the Bolsheviks? success. Many will ponder how much influence Lenin had in the Russian revolutions, one thing is clear. He will be marked down as one of the few that changed the course of Russian history. 1 Lenin?s Revolution ? David R. Marples 2 April These ? Vladimir Lenin 3 Russia ? Robert Service (1997 Penguin) 4 The Russian Revolution ? Richard Pipes 5 Reaction & Revolutions: Russia 1881 ? 1924 ? Michael Lynch 6 Theorist Source: Chris Corin ...read more.