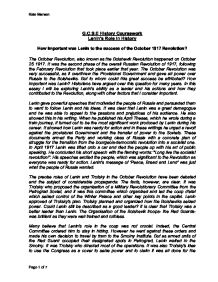 G.C.S.E History Coursework Lenin's Role in History How important was Lenin to the success of the October 1917 Revolution? The October Revolution, also known as the Bolshevik Revolution happened on October 25 1917. It was the second phase of the overall Russian Revolution of 1917, following the February Revolution that took place earlier that year. The October Revolution was very successful, as it overthrew the Provisional Government and gave all power over Russia to the Bolsheviks. But to whom could this great success be attributed? How important was Lenin? Historians have argued over this question for many years. In this essay I will be exploring Lenin's ability as a leader and his actions and how they contributed to the Revolution, along with other factors that I consider important. Lenin gave powerful speeches that motivated the people of Russia and persuaded them to want to follow Lenin and his ideas. It was clear that Lenin was a great demagogue and he was able to appeal to the passions and prejudices of his audience. He also showed this in his writing. When he published his April Theses, which he wrote during a train journey, it turned out to be the most significant work produced by Lenin during his career. It showed how Lenin was ready for action and in these writings he urged a revolt against the provisional Government and the transfer of power to the Soviets. These documents armed the Party and working class of Russia with a concrete plan of struggle for the transition from the bourgeois-democratic revolution into a socialist one. In April 1917 Lenin was lifted onto a car and riled the people up with his art of public speaking. He concluded his short speech with the flaming words: "Long live the socialist revolution!". His speeches excited the people, which was significant to the Revolution as everyone was ready for action. ...read more.

The Constituent Assembly was set up by the Provisional Government after Tsar Nicholas abdicated. In November 1917 elections took place. The Bolsheviks were disappointed with the results as the Socialist Revolutionaries won instead. On 5th January the leader of the Socialist Revolutionaries was elected President. Later that day Lenin announced that the Constituent Assembly had been dissolved and ruled by decree. Soon afterwards all opposition political groups were banned in Russia. A secret police, the Cheka, was set up to deal with spies and counter-revolutionaries. There was a great deal of repression in Russia, such as all non-Bolshevik papers being banned. The freedom of opinion in Russia, which had been achieved by the Provisional Government, was lost in the space of two months. Banks were put under Bolshevik government control. The Bolsheviks banned religion and abolished the teaching of history and Latin. Some things did improve for the workers. An eight-hour day was introduced as well as unemployment pay and pensions. The Bolsheviks gave the land previously owned by the nobles to the peasants, and factories were handed over to worker's committees. There was also a huge campaign to teach everyone to read. Trains went around the country showing communist newsreels and giving lectures to teach peasants about Communism. A law of December 1919 decreed that the illiterate, who comprised of over half the country's population, should attend school. The Russian economy was already in a critical state at the time of the Revolution but the crisis worsened as World War was replaced by Civil War. In 1917 Lenin introduced 'War Communism' which meant that special measures were needed to deal with a national emergency. The period between 1918 and 1921 came to be known as the period of War Communism. Farms and factories were put under state control and private trade was banned. Food was taken for soldiers and industrial workers. Peasants who refused to hand it over to the red Army were shot or sent to labour camps. ...read more.

Lenin's policy of war communism was a harsh policy to the people of Russia. In war communism all industry was nationalised and state monopoly on foreign trade was introduced. Food was rationed and distributed in a centralised manner and private enterprise became illegal. Similarly, in the late 1920's, after Stalin came to power he introduced the Collectivization of Agriculture policy. He wanted to increase the efficiency and output of agriculture in order to move towards an industrial revolution and eventually communism, like Lenin who introduced war communism as a way of forcing communism onto the people of Russia. In Stalin's collectivization programme peasants were encouraged to join collectives and share their food between themselves and workers in industrial cities. This was similar to war communism as the peasants were working for each other instead of just looking after themselves. Although on the surface Stalin's programme seemed more lenient than Lenin's as the peasants were only 'encouraged', the facts suggest differently as any peasants who objected to Stalin's plans were evicted from their land and many died while resisting eviction or in labour camps. Both Stalin and Lenin believed strongly in the ideal of communism and through these two policies were working hard to achieve this ideal. Lenin's influence after his death was seen everywhere and he was a national hero. Within the USSR Lenin remained as important after his death as before. He was beyond official criticism and he was seen by future leaders as the father of communism in Russia. Even when Lenin was no longer considered an icon, he was not classed with other Soviet leaders, such as Stalin and Brezhnev, who were greatly criticized for their policies of repression and cruelty. In my opinion Lenin was a great influence in Russia even many years after his death and this was shown in the public's adoration of what he stood for; his iconic, heroic status in Russia; and the similarities between his own and future policies and programmes in the Soviet union. ?? ?? ?? ?? Kate Manson Page 1 of 7 ...read more.