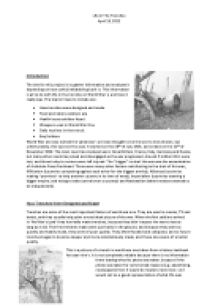 Life In The Trenches - research and evaluation of the sources

﻿Life In The Trenches April 19, 2012 Life In The Trenches By Nadine Thomas 9.5 Introduction The aim for this project is to gather information and evaluate it depending on how useful/reliable/typical it is. This information is all to do with life in the trenches in World War 1, and how it really was. The topics I have to include are: 1. How trenches were designed and made. 2. Food and rations soldiers ate. 3. Health issues soldiers faced. 4. Weapons used in World War One. 5. Daily routines in the trench. 6. Boy Soldiers World War one was named the ?great war? as it was thought to be the war to end all wars, but unfortunately, this was not the case. It started on the 28th of July 1914, and ended on the 11th of November 1918. The main countries involved were: Great Britain, France, Italy, Germany and Russia, but many other countries joined and disengaged as the war progressed. Around 9 million life?s were lost, and those lucky to survive were left injured. The ?trigger? to start the war was the assassination of Archduke Franz Ferdinand. There were many other factors contributing to the start of this war; Militarism (countries competing against each other for the biggest armies), Alliances (countries making ?promises? to help another country in its time of need), Imperialism (countries wanting a bigger empire, and trying to take control over a country) and Nationalism (where nations wanted to be independent). How Trenches Were Designed and Made Trenches are some of the most important factors of world war one. They are used in movies, TV and books, and they usually help paint a very bleak picture of the war. When the first soldiers arrived in ?No Man?s Land? they hurriedly made trenches, because they didn?t expect the war to last as long as it did. The first trenches made were just holes in the ground, and because they were so quickly and hastily made, they were of poor quality. ...read more.

This picture is reasonably reliable because from my own knowledge I know that rats were a vast obstruction on both sides of no man?s land, but I do not know why this photo was taken and for what reason it was taken, so it?s less reliable because of that. If it was taken to be put in a magazine, to show the soldiers were enjoying themselves, then it would have been over exaggerated, to make the war look like more of a ?game?. This source is quite typical also because I know that a lot of the soldiers were bored whilst there were in the trenches, and that they usually could not sleep at night because of the rats crawling over them in their sleep. This may be why they made a diversion and some entertainment for themselves, by shooting or hitting rats to pass their time. I can see a bat or a club of some sort, and I assume that that was the instrument used to killed the rats. This source is fairly useful; because it shows you how big the rats were in WW1 and what the soldiers did as a pastime. ?We slept in our clothes and cut our hair short so that it would tuck inside our caps. Dressing simply meant putting on our boots. There were times when we had to scrape the lice off with the blunt edge of a knife and our underclothes stuck to us. ? (Elizabeth de T?Serclaes ? a nurse on the front line) Here is a diary extract by Elizabeth de T?Sercales, who was a nurse on the front line. Although she was a nurse and not a soldier, she still had to live in poorer living conditions. I would say that this source is somewhat reliable, because it was a diary extract, so she would not need to exaggerate anything because the only person she would be lying to would be herself. ...read more.

The youngest boy ever to be killed in WW1 was only 13. Some boys even ran away from school to go and fight. Victor Silvester was a fourteen year old school boy, who ran away from his school (Ardingly College) to fight, and claimed he was nineteen when asked of his age. His parents were told of his disappearance two weeks later, and guessed that he had joined up for the army. They were right, and it wasn?t until Victor was injured aged 17 that he was finally brought home. Eventually, the number of too young soldiers fighting on the battlefields dropped, because boys that had been sent back home spread the messages of what war was really like, and the horrors that went on there. Under-age boys were sent back home like 13 year old George Maher: "I was locked up on a train under guard, one of five under-age boys caught serving on the front being sent back to England. The British Army were also more thorough in checking the ages of the recruiting soldiers when WW2 came around, because they were not about to make the same mistakes of letting school-aged children join up. Conclusion This project has contributed a lot to my knowledge of WW1, and I am happy to have been given the great opportunity to broaden my awareness and understanding of WW1 and what life was really like in the trenches. I never thought that there was more than one way to dig a trench, it?s common knowledge that you dig downwards, but I did not realize that you could dig from underneath or even digging from the inside and outwards (tunnelling and sapping). I found out about the conditions in the trenches, the food shortages, the daily routines and the weapons they used. I think I have done well in this project, because I put a lot of effort into it, and I am proud of my work. By Nadine Thomas 9.5 Miss O?Hanlon ...read more.