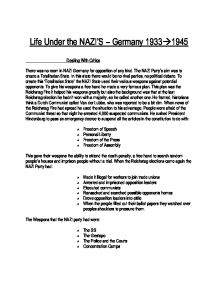 Life Under the NAZI'S - Germany 1933-->1945 Dealing With Critics There was no room in NAZI Germany for opposition of any kind. The NAZI Party's aim was to create a Totalitarian State. In this state there would be no rival parties, no political debate. To create this 'Totalitarian State' the NAZI State used their various weapons against potential opponents. To give his weapons a free hand he made a very famous plan. This plan was the Reichstag Fire it helped his weapons greatly but also the background was that at the last Reichstag election he hadn't won with a majority, so he called another one. He framed, historians think a Dutch Communist called Van der Lubbe, who was reported to be a bit dim. When news of the Reichstag Fire had spread he used the situation to his advantage. People were afraid of the Communist threat so that night he arrested 4,000 suspected communists. He rushed President Hindenburg to pass an emergency decree to suspend all the articles in the constitution to do with: * Freedom of Speech * Personal Liberty * Freedom of the Press * Freedom of Assembly This gave their weapons the ability to extend the death penalty, a free hand to search random people's houses and imprison people without a trial. When the Reichstag elections came again the NAZI Party had: * Made it illegal for workers to join trade unions * Arrested and imprisoned opposition leaders * Executed communists * Ransacked and searched possible opponents homes * Drove opposition leaders into exile * When the people filled out their ballot papers they watched over peoples shoulders to pressure them. ...read more.

Hitler succeeded in ensuring propaganda by using censorship. He censored opposite ideas and because he owned radio, the press, films and the theatre he tailored them to show huge amounts of propaganda. Hitler used a very sneaky, sly method to get propaganda into peoples heads subliminally. He did this by using the radio he gave them to the German people as gifts but because he owned the radio he while people were off guard crammed propaganda that may have been subtle but had the desired effect of propaganda. Dr. Joseph Goebbels was put in charge of the NAZI'S propaganda. Another way he used propaganda was that the NAZI Party help press conferences which 'guided' the press. Really steering the newspapers to what they wanted them to say. Another use of propaganda is the mass rallies. Hitler stirred up the audience and there were many uses of fireworks and other things that incited the crowd into frenzy. Due to the propaganda and the censorship that took place in Germany between 1933 - 1945 most Germans were moulded into something that the NAZI Party wanted. Without their use of propaganda and censorship people could have perceived the raw facts but by censoring and adapting them people perceived a brain dead copy which moulded their perception. Education and the Young Hitler realised that the youth of Germany if moulded correctly could be of great benefit. He started the NAZI Youth Group's that encouraged accepting Hitler as a god. They believed more in Hitler than they did in their parents. ...read more.

Such things as the holocaust ensued. An important part that the Jews played in Germany was that they were mostly very well off business people. Therefore to create more jobs Hitler literally did a hostile take-over of their industries and created more German jobs. Jews in September 1935, in the Nuremberg Laws Jews were no longer considered citizens but subjects. Thus Jews lost some of their rights. Later things followed such as they had to register all their property so that it was easier to confiscate and they had to have a huge 'J' stamped onto their passport. Women Women in Germany were greatly needed but disliked in the same way. Hitler realised that to have a better empire they needed a large population and recently the birth was low. So the NAZI Party encouraged births. There were many ways, for example: * Discourage Contraceptives * Give prizes to be gained for good mothers * Use lots of propaganda to think that they want children. * Give benefits to parents with lots of children. * Make the society look up to women who were pregnant. * Make divorce legal for anyone who's partner was infertile. The mother's had to fit a certain 'mould'. They had to cook, look, work, act and bring their children up in a certain way. An Aryan lady by the name of Gertrude Scholtz-Klink was put as a figurehead for women to look up to. But now that the birth rate had gone up by 30% Hitler realised that Germany needed workers. Thus they had to set off another propaganda campaign saying that women should go back to work. They needed more workers because of the 4-year plan. ...read more.