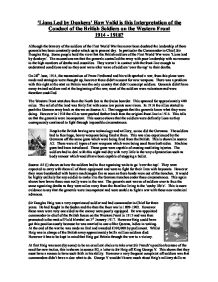 'Lions Led by Donkeys' How Valid is this Interpretation of the Conduct of the British Soldiers on the Western Front 1914 - 1918?

'Lions Led by Donkeys' How Valid is this Interpretation of the Conduct of the British Soldiers on the Western Front 1914 - 1918? Although the bravery of the soldiers of the First World War has never been doubted the leadership of there generals has been constantly under attack up to present day. In particular the Commander-in-Chief, Sir Douglas Haig. Some people hold the view that the British soldiers of the First World War were 'Lions lead by donkeys'. The accusations are that the generals controlled the army with poor leadership with no remorse to the high numbers of deaths and casualties. They weren't in contact with the front-line enough to understand conditions and so they sent wave after wave of soldiers 'over the top' to their deaths. On 28th June, 1914, the assassination of Franz Ferdinand and his wife sparked a war, from this plans were made and strategies were thought up, however these didn't account for new weapons. There was a problem with this right at the start as Britain was the only country that didn't conscript soldiers. Generals didn't have many trained soldiers and at the beginning of the war, most of the soldiers were volunteers and were therefore unskilled. The Western Front stretches from the North Sea to the Swiss boarder. This spanned for approximately 400 miles. The relief of the land was fairly flat with some low points near rivers. In 1916 the allies started to push the German army back as shown on Source A1. That suggests that the generals knew what they were doing. However in 1918 the allies were pushed further back then the original front-line in 1914. This tells us that the generals were incompetent. ...read more.

This attack was successful in reducing pressure from the French however not much land was gained despite the immensely high numbers of casualties. In reality the Battle of the Somme was a tragedy; out of 100,000 soldiers who went 'over the top' on the first day of the conflict alone 20,000 didn't return and a further 40,000 returned wounded! One estimate was that there were 57,470 deaths. Within the first hour alone on the first day of the Somme 21,000 soldiers were killed! This suggests that source B5 does not give a true understanding of what was happening in reality. It gives the impression that the generals are doing an excellent job as the soldiers are defeating the Germans. However as we have already discovered the article was incorrect and there were many lives lost in the Battle of the Somme and a very small amount of land was retreated from there deaths, so even though the Somme did reduce the pressure in Verdun the generals sent thousands to their death to do this. I don't believe that this is the correct way to go about this and so the generals are not as efficient as it may first appear here. Poems are great insights to what the soldiers were facing during the war as they are written from how they are feeling at this time, this means they are extremely helpful to find out more about how the men felt about the war and being apart of it. Source C1 is two poems and is excellent evidence in proving that the soldiers were working in impossible conditions. The two poems were written by Siegfried Sassoon. He served as a Captain in the Royal Welsh Fusiliers on the Western Front. ...read more.

The reason for this was that the technology had revolutionised warfare, making text book battles tactics obsolete. That meant that every country involved in the war now had to discover the new ways of fighting with as little numbers of casualties as possible. In conclusion to looking through all of this evidence I believe that although the soldiers were brave and were earned the right to be called 'Lions' I do not believe that the general have been fairly shown and as a conscience of this they have been labelled 'Donkeys'. This is a very unfair interpretation of the generals and makes people believe that they didn't have the leadership values to take a country through a war and win. As this document shows, although there were thousands of soldiers that died there were also a small number of generals that did in active service. Without these men redeveloping there ideas of war the outcome could have been far grimmer of Britain. This showed there might. Even though they soldiers have been labelled 'Lions' not all of them were. Some prayed for an injury bad enough for them to be sent home to get them out of the war zone. However the vast majority believed they were apart of the war and were needed to send there country to victory even if it means their death. The statement 'Lions Led by Donkeys' in my opinion isn't correct because although not all of the generals did as much as they could of for the war there were a lot that did. This is similar with the soldiers however there were far less that were not a help. Most were afraid but they fought themselves and the enemy to bring there county to the much needed victory. Without the determination of those men it is undoubtedly that the war would not have been won by Britain. ...read more.