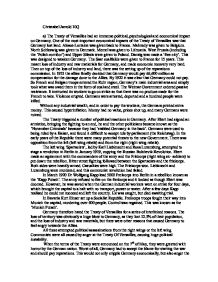 Long term causes like the economic depression 1929-1933, and the failure of the Weimar government were key reasons why Hitler became chancellor of Germany in 1933. But there wer

Christabel Jarrold 10Q a) The Treaty of Versailles had an immense political, psychological and economical impact on Germany. One of the most important economical impacts of the Treaty of Versailles was that Germany lost land. Alsace-Lorraine was given back to France. Malmedy was given to Belgium. North Schleswig was given to Denmark. Memel was given to Lithuania. West Prussia (including the 'Polish corridor') and Upper Silesia were given to Poland. Danzig was made a 'free city'. This was designed to weaken Germany. The Saar coalfields were given to France for 15 years. This meant loss of industry and raw matierials for Germany, and made economic recovery very hard. Then on top of the loss of industry and land, there was the setting up of the reparations commission. In 1921 the allies finally decided that Germany would pay �6,600 million as compensation for the damage done to the Allies. By 1922 it was clear that Germany could not pay. So French and Belgian troops entered the Ruhr region, Germany's main industrial area and simply took what was owed them in the form of coal and steel. The Weimar Government ordered passive resistance. It instructed its workers to go on strike so that there was no produce made for the French to take. Violence erupted. Germans were arrested, deported and a hundred people were killed. Without any industrial wealth, and in order to pay the workers, the Germans printed extra money. ...read more.

Germany continued to ignore the Treaty and regarded it as unjust and enforced. Charles Dawes, an American banker, arranged for reparations to be paid in instalments, starting at �50 million, in line with Germany's ability to pay. US loans then poured into Germany. Germany was further helped by another American plan- the 'Young Plan' (1929), which brought the reparations down to �2,000 million- to be paid over 59 years. In 1925 Germany and France signed the Treaty Of Locarno. In this treaty Germany recognized Alsace-Lorraine as French. The French agreed to withdraw the forces occupying the Ruhrgebiet and Rhineland (1925-1930). They evacuated the city of Cologne in 1926. Also in 1926, Germany and the USSR signed a Pact Of Friendship. Germany was admitted to the League of Nations. In 1928, 65 countries including Germany signed the 'Kellogg-Briand' agreement condemning war. They agreed that the only occasion they would use their armed forces would be to defend themselves. In 1926 Germany was welcomed back into the League of Nations. These various pacts that Stressmann signed began to recover Germany's national pride. The remerging of Germany with the League of Nations made German people sense that they were being recognised as a world power again. Stresemann also increased Germany's political stability. Longer and more stable coalitions were formed. There was better co-operation between the middle class p0arties and the Social Democrats. And there was a decline in the support for parties opposed to the Weimer Republic (e.g. ...read more.

In this way he thought he could control Hitler. However Hitler had absolutely no intention of letting anyone else upstage him, and in January 1933 he became Chancellor. This understatement of Hitler's ability was a key short-term factor in his rise to power. Overall, the most important long- term reasons for Hitler's rise to the post of Chancellor were those which were most detrimental to Germany's economy and political status, such as the signing of the treaty of Versailles, the hyperinflation crisis, and the Great Depression. The economic and political disasters that occurred definitely helped Hitler and the NSDAP to prosper and develop into the largest party in the Reichstag in 1932. Article 48 (in times of crisis the president can take over power of the Reichstag) was a crucial political factor, and the weaknesses of the Weimar Constitution and its politicians, the appeal of the Nazis and their violence, the fear of communism, and the actions of Hindenburg and von Papen were all important factors which facilitated Hitler's rise to power. Finally, his becoming chancellor was also powerfully advanced by his immense personal charisma and leadership qualities. So overall the impact of the economic depression was an important reason why Hitler became Chancellor in 1933, but not the only one. Hitler made it happen for himself; he was a charismatic speaker, and a clever politician. He targeted the weak areas of Germany, and provided scapegoats for all of Germany's problems. The Weimar Government's weakness was Hitler's strength, and he thrived on the increasing support the Nazis were receiving. ...read more.