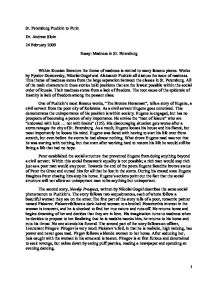 St. Petersburg Pushkin to Putin Dr. Andrew Sloin 24 February 2009 Essay: Madness in St. Petersburg Within Russian literature the theme of madness is central to many famous pieces. Works by Fyodor Dostoevsky, Nikolai Gogol and Aleksandr Pushkin all discuss the issue of madness. This theme of madness stems from the large separation between the classes in St. Petersburg. All of the main characters in these stories hold positions that are the lowest possible within the social order of Russia. Their madness stems from a lack of freedom. The root cause of the epidemic of insanity is lack of freedom among the peasant class. One of Pushkin's most famous works, "The Bronze Horseman", tells a story of Eugene, a civil servant from the poor city of Kolomna. As a civil servant Eugene goes unnoticed. This demonstrates the unimportance of his position is within society. Eugene is engaged, but has no prospects of becoming a person of any importance. He envies the "men of leisure" who are "endowed with luck ... not with brains" (135). His discouraging situation gets worse after a storm ravages the city of St. Petersburg. As a result, Eugene looses his house and his fianc�, but most importantly he looses his mind. ...read more.

Pirogov is at first furious and determined to seek revenge, but calms down by eating puff pastries, reading a newspaper and spending an evening dancing. This story presents two characters who differ in one important aspect; they are from two very different social standings. The outcome of their situations is a result of the social framework that they exist in. Lieutenant Pirogov was a man respected in St. Petersburg society. He had choices and a sense of freedom and when he was beaten up and lost the woman he was in pursuit of he was able to move one because he did not have as much vested in the relationship. He knew that he had a future and that he would find another woman. Piskarev the painter wasan outcast, "(he) belonged to a class which represents quite a strange phenomenon... (he) belonged as much to the citizens of Petersburg as a person who comes in a dream belongs to the real world" (252). He may have been unusual but it was not his strangeness that resulted in madness, it was the social position he could not escape from. Because he was so low within the socioeconomic framework of St. ...read more.

After looking at each situation, it is necessary to redefine what madness is within the context of these stories. None of these characters actually lost their mind because they were mental, they were slowly broken down by St. Petersburg's social structure. All of the characters were not mad because they were all right, in a way they were very much in touch with reality. They did not deny their position, they saw that the circumstances were not fair; they simply could not do anything to change them. Instead of denying their status, they accepted their fate and realized there was no reason why they should remain helpless. For these reasons these characters should not be labeled as mad. Rather their behavior was mad relative to those outsiders who did not understand the flaw in the social structure. In all three works the theme of madness is fundamental. However, madness is not individual but rather a social phenomenon, which results from the separation between the classes in St. Petersburg. The three authors point out how St. Petersburgwithholds freedom, leaving each character unable to escape their position in society. It is only when all hope is gone that madness takes over. These stories foreshadow the restructuring of the social framework that would take over in the form of communism. ?? ?? ?? ?? 1 ...read more.