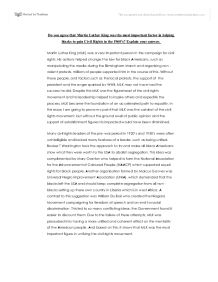 Do you agree that Martin Luther King was the most important factor in helping blacks to gain Civil Rights in the 1960's? Explain your answer. Martin Luther King (MLK) was a very important person in the campaign for civil rights. His actions helped change the law for black Americans, such as manipulating the media during the Birmingham March and organising non-violent protests, millions of people supported him in the course of this. Without these people, and factors such as the local protests, the support of the president and the anger sparked by WWII, MLK may not have had the success he did. Despite this MLK was the figurehead of the civil rights movement and his leadership helped to inspire others and expedite the process. MLK became the foundation of an accelerated path to equality. In this essay I am going to prove my point that MLK was the catalyst of the civil rights movement, but without the ground swell of public opinion and the support of establishment figures his impacted would have been diminished. Many civil rights leaders of the pre-war period in 1920's and 1930's were often unintelligible and lacked many features of a leader, such as being unified. Booker T Washington took the approach to try and make all black Americans show what they were worth to the USA to abolish segregation. This idea was complimented by Mary Overton who helped to form the National Association for the Advancement of Coloured People (NAACP) ...read more.

Also during 1965 riots were held, that did not agree with MLK's idea of non-violent protest. The biggest riot was the Watts Riot in LA, Which resulted in over 900 businesses, public and private buildings being damaged. The Black Nationalists were also a group who criticised King's non-violent methods and the slow pace of change. However, in comparison to MLK they were not as successful has him. During the time of the Black Nationalists they did not make any legal changes towards the civil rights movement, where as MLK did show that he was more successful. Also MLK had million of supporters where as a Black Nationalist groups such as the black panthers only had 250,000. However, we all know that MLK did contribute to the civil rights movement in a massive way but, we have to remember he did not start the civil right movement it was in fact started before WWII. It really gained momentum by the anger felt and the desire for change by the black solders after the war. It all happened when the black solders were only allowed to serve for their country, in the black only units. This was until the black soldiers made an enormous contribution to the war; they fought well in battles in Europe, at the Battle of Bulge, and in the Pacific in the Battle of Iwo Jima. During 1945 black and white troops were able to fight together as a combined unit, up until the war ended. ...read more.

Conversely, many people felt that the government were being "hypocritical" by helping Vietnam and not helping the black people who were also suffering. This had an effect on the Government and changed there point of view causing them to change the laws to benefit the blacks. In conclusion, no one can doubt the profile MLK achieved for himself within the civil rights movement. His public speaking was inspirational and unifying, his Gandhi type stance of non-violent protest, brought onboard the majority of Christian and law abiding people that would have rejected more direct or illegal means. As with so many people in history, he proved to be the right man, in the right place, at right time. His success is in channelling the feeling of un-organised public opinion in to a single goal; one can not succeed with the other. Also at this time media coverage was growing rapidly and he fully understands how to use the new instant mediums of TV and broadcasting. MLK is know as the a very important figure but with out other aspects such as the Bus Boycotts and Rosa Parks the process may of taken considerably longer or if not never happened. However, the assassination of Martin Luther King that occurred in 1968 allowed his memories to be immortalised, and the fact that he died for the cause give him an element of martyrdom, meaning when the civil right movement is mentioned he is perceived as the fore most important person. ...read more.