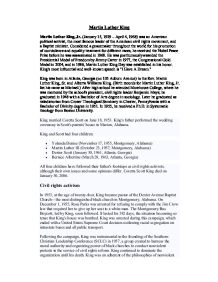 Martin Luther King Martin Luther King, Jr. (January 15, 1929 - April 4, 1968) was an American political activist, the most famous leader of the American civil rights movement, and a Baptist minister. Considered a peacemaker throughout the world for his promotion of nonviolence and equality treatment for different races, he received the Nobel Peace Prize before he was assassinated in 1968. He was posthumously awarded the Presidential Medal of Freedom by Jimmy Carter in 1977, the Congressional Gold Medal in 2004, and in 1986, Martin Luther King Day was established in his honor. King's most influential and well-known speech is "I Have A Dream." King was born in Atlanta, Georgia (on 105 Auburn Avenue) to the Rev. Martin Luther King, Sr. and Alberta Williams King. (Birth records for Martin Luther King, Jr. list his name as Michael.) After high school he attended Morehouse College, where he was mentored by the school's president, civil rights leader Benjamin Mays; he graduated in 1948 with a Bachelor of Arts degree in sociology. Later he graduated as valedictorian from Crozer Theological Seminary in Chester, Pennsylvania with a Bachelor of Divinity degree in 1951. In 1955, he received a Ph.D. in Systematic theology from Boston University. King married Coretta Scott on June 18, 1953. King's father performed the wedding ceremony in Scott's parents' house in Marion, Alabama. ...read more.

Indeed, journalistic accounts and televised footage of the daily deprivation and indignities suffered by southern blacks, and of segregationist violence and harassment of civil rights workers and marchers, produced a wave of sympathetic public opinion that made the Civil Rights Movement the single most important issue in American politics in the early-1960s. King organized and led marches for blacks' right to vote, desegregation, labor rights and other basic civil rights. Most of these rights were successfully enacted into United States law with the passage of the Civil Rights Act of 1964 and the Voting Rights Act of 1965. King and the SCLC applied the principles of nonviolent protest with great success by strategically choosing the method of protest and the places in which protests were carried out in often dramatic stand-offs with segregationist authorities. Sometimes these confrontations turned violent. King and the SCLC were instrumental in the unsuccessful protest movement in Albany, in 1961 & 1962, where divisions within the black community and the canny, low-key response by local government defeated efforts; in the Birmingham protests in the summer of 1963; and in the protest in St. Augustine, Florida, in 1964. King and the SCLC joined forces with SNCC in Selma, Alabama, in December 1964, where SNCC had been working on voter registration for a number of months. ...read more.

The March on Washington King and SCLC, in partial collaboration with SNCC, then attempted to organize a march from Selma to the state capital of Montgomery, for March 25, 1963. The first attempt to march on March 7, was aborted due to mob and police violence against the demonstrators. This day since has become known as Bloody Sunday. Bloody Sunday was a major turning point in the effort to gain public support for the Civil Rights Movement, the clearest demonstration up to that time of the dramatic potential of King's nonviolence strategy. King, however, was not present. After meeting with President John F. Kennedy, he had attempted to delay the march until March 8, but the march was carried out against his wishes and without his presence by local civil rights workers. The footage of the police brutality against the protesters was broadcast extensively across the nation and aroused a national sense of public outrage. The second attempt at the march on March 9 was ended when King stopped the procession at the Edmund Pettus Bridge on the outskirts of Selma, an action which he seemed to have negotiated with city leaders beforehand. This unexpected action aroused the surprise and anger of many within the local movement. The march finally went ahead fully on March 25, with the agreement and support of President Kennedy, and it was during this march that Willie Ricks coined the phrase "Black Power" (widely credited to Stokely Carmichael). ...read more.