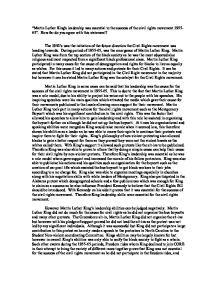 “Martin Luther King's leadership was essential to the success of the civil rights movement 1955-65”.  How far do you agree with this statement?

Martin Luther King in some cases can be said that his leadership was the cause for the success of the civil rights movement in 1955-65.  This is due to the fact that Martin Luther King was a role model, due to his ability to project his voice out to the people with his speeches.  His inspiring speeches were his main qualities which attracted the media which gave their cause for their movements publicized to the locals allowing more support for their movement.  Martin Luther King took part in many actions for the civil rights movement such as the Montgomery Boycott which was his significant contribution to the civil rights.  This was the factor that allowed his speeches to allow him to gain leadership and with this role he assisted in organizing the boycott further on although he did not set up the bus boycott.  At times his organizational and speaking abilities were merged as King would raise morale when it seemed low, this therefore shows his abilities as a leader as he was able to renew their spirits to continue their protests and inspire them to fight for their rights.  King’s philosophy of non violent protesting also allowed blacks to gain a better respect for them as they proved they were not the violent beasts as the whites called them.  With King’s support it allowed such protests like the sit-ins to be publicized.  Therefore King was also able to prove to others that by doing a simple cause can help their cause for their civil rights by non-violent protests.  Therefore King’s leadership was essential as he was a role model whom gave support and increased the morale of his fellow protestors.  King was also able to publicize his actions and his qualities such as organization for the boycott such as the creation of car pool lifts which assisted the bus boycott to get black workers to their jobs according to a no charge fee.  King also was able to organize meetings especially in churches along with his negotiation skills with white leaders of Montgomery.  King also participated in the Alabama protest which desegregated schools and a few public areas which was enough for King to claim as a success as he also influence President Kennedy to believe that the Civil Rights Bill should be introduced.  With Kennedy on his side it proves that it was essential for the success of the civil rights movement.  Therefore King leadership skills were essential for the civil rights movement.

However Martin Luther King’s leadership abilities can be judged negatively.  Martin Luther King did not do much for the cause for civil rights as he did not organize the bus boycotts and many other protests.  The Greensboro sit-in, Martin Luther King did not organize the sit-ins but however with his pledge of support proved he did not lead the sit-ins as the protest was not led by any significant individuals.  Although it was successful but King did not participate a large contribution to this protest as he only made a speech to the protesters in North Carolina to the Student Non-violent coordinating Committee.  Kings abilities may be largely known for but however in overall King’s abilities was only able to unify the black society to fight as a whole.  Such other events during the 1955-65 periods, Freedom rides whom King declined to join CORE in their attempt to bring the variety of different races together prove that King was not essential for the success of the civil rights movement as he did not participate in the freedom rides, and hardly participated in the sit-ins.  King’s contribution to civil rights was mainly the bus boycott so therefore he was not essential for the success of civil rights.  King also contributed the Albany campaign; however the movement was originally from the freedom riders of SNCC during 1961-2.  This campaign was a protest that failed significantly as they protested they were ordered by law to disperse however it did not happen and therefore led to many protestors being arrested.  King was attempting to draw attention to the whole issue by refusing to pay and he was jailed.  This was all part of his protest however his plan failed this is caused by the local police chief Pritchett who was tactically shrewd and knew how to prevent to the whole protest becoming involved with the media.  The second time King protested he was arrested but instead of being jailed he was anonymously bailed showing his cause for protest a failure as it did not product any local change.  In Albany rather having areas desegregated it led to areas to worsen such as parks closed, desegregated libraries to remove their chairs.  Therefore his actions led to areas to worsen in segregation than reaching towards desegregation.  Therefore Martin Luther King was not essentially needed for the success of civil rights meaning his leaderships abilities were not needed as well.

Was King a significant factor to the success of civil rights?  King was not a significant character in the success of civil rights as King did not participate much in the civil right movement however it can be said he was the catalyst for the success.  King was able to convert Kennedy with ideas of bringing the Civil Rights Bill forward by the Alabama protest even though Kennedy was assassinated but the Bill was still put forward in remembrance of him.  King only contribution was the Alabama campaign which in the end he was jailed and unable to proceed with any more contributions and his main contribution which was the bus boycott which was only the beginning of the civil rights act.  His contribution towards the Greensboro sit-ins were not significantly identified as he only made a speech that he supported it.  It can be argued in both ways but however King’s contribution towards the civil rights movement was not a major amount and it can be said that his leadership was not essential to the success for civil rights as he did not contribute much to the movement.  His actions of the Alabama protest also led to the injuries of his fellow protestors including youths proving his leadership skills were not reinforce as police dogs were set lose and police fired hoses against the protestors.  King did not overlook the outcome of his protests as he was jailed a number of times as well.  Therefore it can be said his leadership was not essential for the success of the civil rights movement.