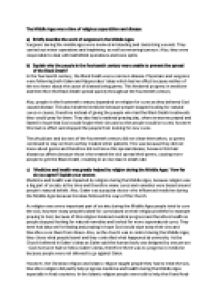 Medicine and Religion in the Middle Ages

Transfer-Encoding: chunked ﻿The Middle Ages was a time of religious superstition and disease 1. Briefly describe the work of surgeons in the Middle Ages. Surgeons during the middle ages were involved in bleeding and cauterizing wounds. They carried out minor operations and trephining, as well as removing tumours. Also, they were responsible to deal with battlefield operations and bone splits. 1. Explain why the people in the fourteenth century were unable to prevent the spread of the Black Death? In the fourteenth century, the Black Death was a common disease. Physicians and surgeons were following both Galen and Hippocrates? ideas which had no effect because neither of the two knew about the cause of disease being germs. This hindered progress in medicine and therefore the Black Death spread quickly throughout the fourteenth century. ...read more.

and looked for their own, natural cures and to help the sick, they built hospitals which were famous for the care they gave patients. Also, the Arab doctors shared their knowledge by writing medical encyclopaedias which organised their medical knowledge and allowed other to learn from them. Al-Razi and Ibn Sina were two of the Arab doctors that improved medicine and health by using methods of both Galen and Hippocrates as well as their own. They encouraged people to look passed Galen and to search for new methods to improve health and treat the sick as their religion states. Therefore, religion had positive impacts on medicine and health in Arab countries. Medicine and health was largely impacted by religion during the Middle Ages, however it did not help everyone as in European countries it hindered medical advances but in Arab countries it did help medicine. ...read more.