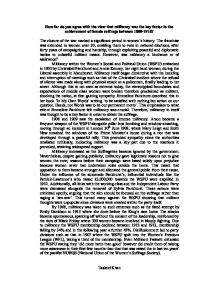 How far do you agree with the view that militancy was the key factor in the achievement of female suffrage between 1880-1918? The closure of the war marked a significant period in women's history. The franchise was extended to women over 30, enabling them to vote in national elections, after forty years of campaigning and hardship, through exploiting peaceful and diplomatic tactics to unlawful militant means. However, was militancy a hindrance or of assistance? Militancy within the Women's Social and Political Union (WSPU) embarked in 1905 by Christabel Pankhurst and Annie Kenney, her right hand women, during the Liberal assembly in Manchester. Militancy itself began diminutive with the heckling and interruption of meetings such as that of the Christabel incident where the refusal of silence was made along with physical attack on a policemen, finally leading to her arrest. Although this is not seen as extreme today, the stereotypical boundaries and expectations of middle class women were broken therefore proclaimed as militant, shocking the nation, at first gaining sympathy. Emmeline Pankhurst described this in her book 'In My Own Words' writing 'to be satisfied with nothing but action on our question. Deeds, not Words was to be our permanent motto'. This emphasises to what extent Emmeline Pankhurst felt militancy was crucial. Therefore, militancy in itself was thought to be a key factor in order to obtain the suffrage. 1908 and 1909 saw the escalation of intense militancy. Arson became a frequent weapon of the WSPU alongside pillar box bombing and window smashing, rooting through an incident in London 30th June 1908, where Mary Leigh and Edith New smashed the windows of the Prime Minister's house during a riot that was developed through a peaceful rally. ...read more.

Besides, this was obtained through peaceful methods, highlighting that militancy was not necessary for the final aim to be achieved. The NUWSS was instituted by Millicent Garett Fawcett who unlike the WSPU, the NUWSS used peaceful and law-abiding methods to extend the franchise to women. Their aim was 'to promote and claim of women to the parliamentary vote on the same terms as it is or may be granted to men'. The NUWSS was formed by all minor suffrage movement parties uniting, establishing in Manchester in 1897. MPs such as John Stuart Mill were actively participating with the Suffragists who had close links with all political parties. He raised the women's suffrage issue in the vote of 1867 Reform Act which created over half a million new male voters. Due to militancy in the later years such supporters were lost. The Mud March in February 1907 was the first procession to London where over 3,000 women marched pressuring the government who in June, the Prime Minister Asquith asked to see a majority of the suffrage supporters. Hence, in June 1908, the 'Women's Sunday' in Hyde Park was organised by the WSPU alongside the NUWSS, involving over half a million women in a peaceful demonstration. Women of poor background were paid by richer members as aid, however despite the effort; Asquith claimed that this was not enough to prove the majority of women wanted the vote. This gained sympathy and raised much awareness, increasing the membership significantly. Those who did not want to participate openly could do so anonymously. ...read more.

Other factors such as international context also played a part in gaining the vote for women. Social breakthroughs had already occurred in other European countries such as Switzerland, France, Germany and even Russia. Britain being a power did not want to have the humility of falling behind, pushing the debate for the vote towards the movement. Conversely, the women included had not generally participated in the war work. In conclusion, despite militancy raising mass awareness and determination with some successes, it can be seen it was a hindrance more than of assistance. This is because later it started turning influential individuals against the movement and also proved many of the anti arguments correct. Clearly, the most important factor would be of the early suffrage campaign. This campaign, yet slow, brought many successes, both social and political, and indeed by the 1900's, it seemed that women will finally be granted the vote. This factor enabled women to break through the separate spheres and challenge stereotypical view pacifistically, highlighting them positively in the eyes of the country and removing many major comparisons to their male counterparts. Consequently, it is extremely likely women would have gained the vote earlier if not had it been for militancy since it is argued that the second Conciliation Bill had been rejected in 1912 solely due to the extreme militant activities, demonstrating the negative impact of militancy on the vote. On the whole, militancy although giving some headway, was not the most important factor; evidently it was the early suffrage movement which raised the issue in such ways that conditions improved socially and politically for women. Additionally, at such improving rate, it undoubtedly seemed women would finally obtain the vote by 1900. ...read more.