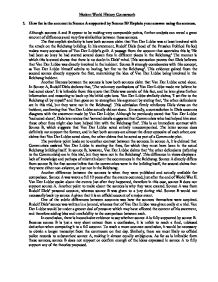 Modern World History Coursework 1. How far is the account in Source A supported by Source B? Explain your answer using the sources. Although sources A and B appear to be making very comparable points, further analysis can reveal a great amount of differences and very few similarities between these sources. The first explicit similarity is how both sources claim that Van Der Lubbe was at least involved with the attack on the Reichstag building. In his statement, Rudolf Diels (head of the Prussian Political Police) makes many accusations of Van Der Lubbe's guilt. A passage from the account that ascertains this is; 'He had been so busy he had started several dozen fires in different places in the Reichstag.' The manner is which this is stated shows that there is no doubt in Diels' mind. This accusation proves that Diels believes that Van Der Lubbe was directly involved in the incident. Source B strongly corroborates with this concept, as Van Der Lubbe himself admits to having, 'set fire to the Reichstag'. This evidence gained from the second source directly supports the first, maintaining the idea of Van Der Lubbe being involved in the Reichstag incident. Another likeness between the sources is how both sources claim that Van Der Lubbe acted alone. In Source A, Rudolf Diels declares that, 'The voluntary confessions of Van Der Lubbe made me believe he had acted alone'. It is inferable from this quote that Diels was certain of this fact, and he later gives further information and reasoning to back up his initial opinions. Van Der Lubbe similarly claims, 'I set fire to the Reichstag all by myself' and then goes on to strengthen his argument by stating that, 'the other defendants are in this trial, but they were not in the Reichstag'. This admission firmly reinforces Diels views on the incident, confirming that Van Der Lubbe actually did act alone. ...read more.

Halder's statement also can be confirmed from existing background knowledge, which claims that G�ring was in fact quite pretentious and would have had no inhibitions about openly boasting about such an event at a gathering of high-ranking Nazis. One possible reason for slight exaggeration might be the want of revenge on Halder's part. Although this should be taken into consideration, it is not a major point that should alter the reliability of the source dramatically. Source E appears to show very little bias and should be considered as containing and portraying at least a sense of truth. Karl Ernst was a young, high-ranking SA officer, with approximately 300,000 men under his command in Berlin alone. When questioned informally by a fellow Dutch right-wing political supporter, he answered; 'If I said yes, I'd be a bloody fool, if I said no; I'd be a bloody liar'. This quote backs up his statement in source G, because it is almost a confession of his guilt. Because it is a secondary source, however, it may still have been affected by bias. The quote seems to have been very vague and ambiguous, although Ernst seems too scared of the consequences to admit his view of the outright truth. One of the main problems with source G is that there is no way to tell how much truth it contains. This is for several reasons, the primary cause being that the quote was only published (albeit on his own orders) after his brutal death on the 'Night of the Long Knives'. Karl Ernst supposedly entrusted his confession in the hands of the Communist party and commanded that it only be published only if he received a vicious death. There is no evidence to suggest that the Communists didn't merely fabricate this confession ain order to regain support from the German people. Although there are many faults with the source, it does compare well with background historical knowledge from the period. ...read more.

This new generation of Nazis were bred and specifically trained to be at the peak of physical fitness, as is evident from the physical training they undertook. It was the ultimate goal of all boys in the youth organisations to serve Germany at wartime and fight on the military front, whereas the goal of the young girls was to become mothers and make Germany strong by creating an even better generation of children. The training and schooling of Nazi children reflected this concept, making young men into powerful fighting machines and young women into perfect mothers and housewives. Another purpose of recruiting young people into these organisations was so that the Nazi leaders had spies inside every home and school in Germany. Many children informed on their parents and teachers for rejecting their Nazi teachings. Although for the majority of the time these Nazi ideas were quite successful, some rejected them. The Edelweiss Pirates were another, independent youth organisation that had very different concepts to that of the Nazi youth. Many children were bullied into the Hitler youth organisations but still followed commands and followed the Hitler youth unquestioningly. Question 2. Explain the reasons for Nazi policies towards German women. After coming to power in 1933, the Nazi leaders tried not only to control Germany from a military and economic perspective, but also attempted to manipulate the social structure already in place. The Nazi regime that replaced this structure encouraged discrimination, inequity and extreme prejudice. These extremist policies led not only to racial intolerance and bigotry, but also to the creation of a significant rift between the rights of men in women. Although the Nazi party received the highest percentage of votes in the last democratic election before the war, and seized totalitarian control of Germany, these policies of intolerance were introduced by the NSDAP in the early 1920s. Many laws were passed in order to encourage the procreation of the 'pure Aryan race', most of which offered rewards in the form of prizes and monetary sums. ?? ?? ?? ?? ...read more.