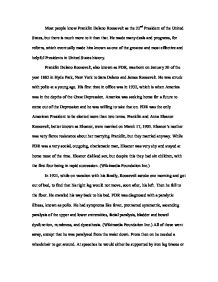 Most people know Franklin Delano Roosevelt as the 32nd President of the United States, but there is much more to it than that. He made many deals and programs, for reform, which eventually made him known as one of the greatest and most effective and helpful Presidents in United States history. Franklin Delano Roosevelt, also known as FDR, was born on January 30 of the year 1882 in Hyde Park, New York to Sara Delano and James Roosevelt. He was struck with polio at a young age. His first time in office was in 1932, which is when America was in the depths of the Great Depression. America was seeking home for a future to come out of the Depression and he was willing to take that on. FDR was the only American President to be elected more than two terms. Franklin and Anna Eleanor Roosevelt, better known as Eleanor, were married on March 17, 1905. Eleanor's mother was very fierce resistance about her marrying Franklin, but they married anyway. While FDR was a very social, outgoing, charismatic man, Eleanor was very shy and stayed at home most of the time. Eleanor disliked sex, but despite this they had six children, with the first four being in rapid succession. ...read more.

He was planning on saying a speech before he left. As he was saying the speech, Giuseppe Zangara fired five shots at Roosevelt. Four people were hit. One of them included Roosevelt, but the only fatal shot was on Chicago's Mayor Anton Cermak. Many people believe that the assassination was intended for Cermak, as he was a big foe of the Chicago mob organization. Another big thing that he created was the Judiciary Reorganization Bill of 1937, also known as the Court-Packing Plan. The idea of this bill was to overhaul and modernize the federal court system. It also let Roosevelt power to appoint an additional Justice to the Supreme Court for every member over the age of 70, but up to a maximum of six. (Grapes 97) In 1937, he appointed Hugo Black. In 1938, he appointed Stanley Forman Reed. In 1939, he appointed, Felix Frankfurter and William O. Douglas. In 1940, he appointed Frank Murphy. In 1941, he appointed James Francis Byrnes and Robert H. Jackson. Also in 1941, he elevated Harlan Fiske Stone from Associate Justice to Chief Justice. Finally, in 1943, he appointed Wiley Blount Rutledge. In all, Roosevelt appointed 8 Justices to the court, more than any other President in the United States, except for George Washington, who had appointed 10 Justices. ...read more.

Soon after this, Germany and Italy declared war on the U.S. During this time Hitler was performing the genocide of the Jews, also known as the Holocaust. Discussing how to surrender Nazi Germany, the "Big Three," which included Winston Churchill, Franklin Delano Roosevelt, and Joseph Stalin, met at what was known as the Yalta meeting. This took place on February 4th and ended on February 11th, of 1945. They also talked about other war strategies for the world to remain a peaceful country. Also United States scientists found nuclear fission, which lead Albert Einstein to tell FDR that an atomic bomb was now possible. On June 6th, 1944, the twelve allied nations, which included Australia, Canada, Belgium, France, Czechoslovakia, Greece, New Zealand, the Netherlands, Norway, Poland, the United Kingdom, and the United States, invaded the beaches of Normandy in France, which started the liberation of countries under Nazi control. All of these troops were led under General Dwight D. Eisenhower. This day became known as D-Day. On November 7th, 1944, Roosevelt won the election, which was his fourth term. On March 29, 1945, Roosevelt went to Warm Springs, Georgia to rest. Then on an afternoon, on April 12th, Roosevelt said he had a pain in the back of his head, then fell forward and was unconscious. Franklin Delano Roosevelt died of a cerebral hemorrhage (stroke) at 3:35 P.M. (Wikimedia Foundation Inc. ...read more.