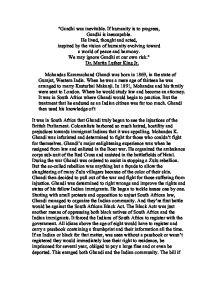 "Gandhi was inevitable. If humanity is to progress, Gandhi is inescapable. He lived, thought and acted, inspired by the vision of humanity evolving toward a world of peace and harmony. We may ignore Gandhi at our own risk." Dr. Martin Luther King Jr. Mohandas Karamachand Ghandi was born in 1869, in the state of Gurajat, Western India. When he was a mere age of thirteen he was arranged to marry Kasturbai Makanji. In 1891, Mohandas and his family were sent to London. Where he would study law and become an attorney. It was in South Africa where Ghandi would begin to practice. But the treatment that he endured as an Indian citizen was far too much. Ghandi then used his knowledge of t It was in South Africa that Ghandi truly began to see the injustices of the British Parliament. Colonialists harbored so much hatred, hostility and prejudices towards immigrant Indians that it was appalling. Mohandas K. Ghandi was infuriated and determined to fight for those who couldn't fight for themselves. ...read more.

All idians above the age of eight would have to register and carry a passbook containing a thumbprint and their information all the time. If an Indian or black for that matter, was seen without a passbook or wasn't registered they would immediately lose their right to residence, be imprisoned for several year, obliged to pay a large fine and or even be deported. This enraged both Ghandi and the Indian community. The bill if passed would surely enslave the Indian populations taking away both their human rights and integrity as human beings. Outraged Indians crowded the Imperial Palace in Johannesburg. Ghandi hoped that his strength in numbers could sway parliament into not passing the bill. Ghandi believed if the bill was passed the fate of Indian communities across Africa would be compromised. Parliament had consequently passed the bill. Civil disobedience, riots and bonfires of burning papers ensued. Thousands of Indians including Ghandi were imprisoned. Indians believed that any kind punishment or consequence would be better than submitting to the bill. ...read more.

Ghandi taught Indians that non-violence and passive resistance would be the only way for colonial forces to eradicate India. When word of Ghandi's plans to free India reached the british parliamentary. They enacted the Rowlatt Acts. When Indian colonial forces were given these emergency powers to end revolutionary acts satygrah spread like wild-fire through all of India. The Rowlatt act entitled police to the use force as they saw fit. The Rowlatt Act resulted in the massacre of thousands of Indians at Amritsar. The british parliament failed to make amends and organized a campaign of non-cooperation with the colonial forces. Indians resigned form public office, children were pulled out of government schools, Indians boycotted all british goods and services and were even sitting in the streets blocking the transportation of British Parliamentary workers. But it didn't end there, in addition to the boycott of british made goods Ghandi preached to Indians to make their own cloth and food, to live moderately and buy only Indian manufactured goods. This resulted in more business for the farmers of India who were suffering from taxation from the British. ...read more.